Even though the Imperial Heartlands culture composites are just one step from finished, I’ve decided to pass beyond the borders to write up the independent nation of Gejara instead.  The last Imperial province, after all, is Daecia and the Palace…

While Gejara is seen only briefly in the series, and that under the cover of (endless) night, its politics and alliances are a persistent undercurrent of influence within the action.  Several characters come from there and are agents of its leaders — a situation that the Empire is not in a position to dispute. 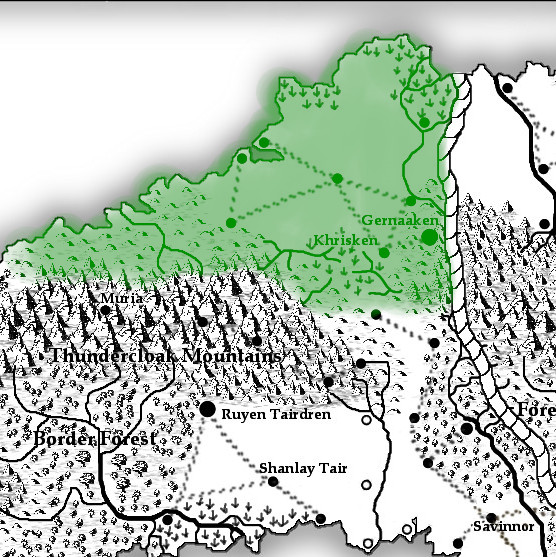 While Gejara appears to touch only lightly upon the Risen Phoenix Empire’s holdings, this is deceiving.  It shares its mountainous southern border with the mixed Muriae and Kerrindrixi territory — the latter an Imperial protectorate — and neighbors another protectorate, Averogne, through the neutral zone of the Pinch.  Beyond that, however, its influence also extends eastward across the Rift, into territory officially considered the tribe-lands of Krovichanka.

Krovichanka runs the full length of the Risen Phoenix Empire’s northern border, and is a persistent source of attacks upon it by the ogre-blooded tribal folk.  Gejara proclaims that it has neither influence over nor alliance with Krovichanka, but many settled supposedly-Krovik communities will — in private — confirm both bloodline-connection to and logistic support from Gejara.  The Empire’s north-border wars are, and always have been, proxy wars meant by Gejara to keep the Empire occupied in its own lands.

The Empire is not unaware of this.  However, between the difficulty of moving troops through Daecia Swamp, the indifference of the Darronwayn people toward pushing the fight beyond their own borders, and the formidable barrier created by the Khaeleokiel Mountains, it has proven impossible for the Empire to push the Krovik forces back permanently — or even consistently.  The lands north of the Daecia Swamp are taiga and tundra, alternately frozen and hideously marshy, and every effort to bring the larger armies of the Heartlands to bear upon the Krovik problem has failed.

In the same way, so has direct assault upon Gejara.  It was last tried ten years before the main action of the series, after Gejara unmasked Imperial spies within its own cities and broke the current Gejaran-Imperial treaty, the Treaty of the Pinch, to eradicate Imperial garrisons currently stationed in the Pinch and the Low Country Kerrindryr foothills.  The Imperial Crimson Army retaliated, retaking those areas, but — as always — could not force its way past the Pinch.  The treaty was renegotiated the next year, as it had been thirty years earlier (forty years before series) after the Empire first claimed Kerrindryr.

The main reason the Empire has consistently failed against Gejara is that Gejara — very much unlike the Empire — is a spirit-friendly and magic-focused nation.  It is the main bastion of one of the three great magical techniques, the Gejaran Collaborative Style, which focuses on gestalt workings, mentalist coordination, and fearless embrace of (almost) all magical arts.  Only puppeteer- and fleshcrafting styles of necromancy remain disallowed.

This magical influence extends to Gejara’s governance.  Gejara is a directorial republic headed by a council known as the Senivaten.  Made up of the elected leaders of major cities and territories, the internally-elected leaders of the major trade guilds, the mages’ academy leaders or appointees, and the elected or appointed representatives of the major faith consortiums, the Senivaten prides itself on its fair representation of all Gejarans — though of course, as with any political system, there are those who doubt or disagree.  Senivaten lower staff, such as clerks and military heads, are not so easily appointed, elected or dismissed, and tend to stay in their roles for decades, providing an operational stability to the admittedly-quite-stable country’s workings.

Having several seats at the table make the mage and spiritist contingent a powerful force within Gejara.  They advise on everything from warfare to agriculture to architecture — all vitally in need of magical assistance.  Threats from the Empire and Jernizan are ever-present, but likewise the cold climate makes the growing season less than adequate for most ogre-blooded residents’ tastes, and the proximity to — and straddling of — the Rift comes with the constant threat of earthquakes.

But to the Gejaran mages, earthquakes are not a danger.  They are an energy-generating opportunity.  And where there is opportunity, there is construction! 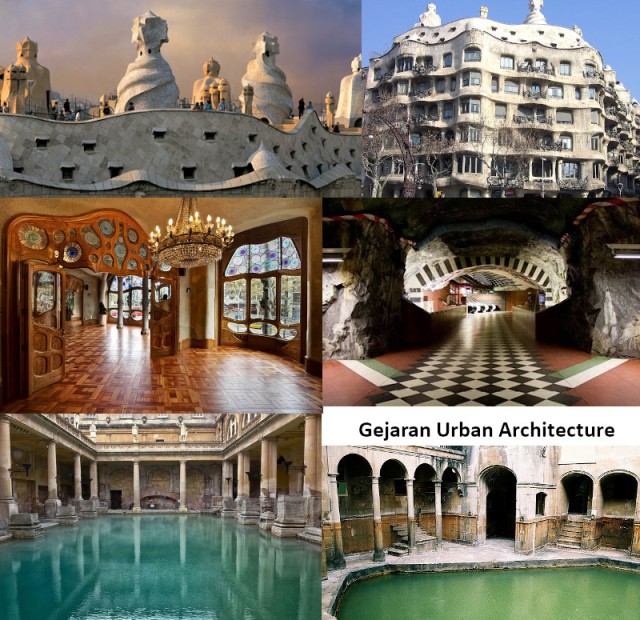 Gejaran architecture was peculiar and organic even before threading magic into it all.  As spiritists, Gejarans have always been dedicated to integrating the spirits into their daily lives — and as ogre-bloods, water access is paramount.  Crafting cities that interest and delight spirits and elementals just as much as they soothe and shelter residents has been the first consideration of Gejaran city planners for centuries.  Thus, buildings within the major cities of Gernaaken and Khrisken, as well as smaller towns near the Rift, are often weirdly-shaped and almost fluid-seeming, and pocked with passageways, alcoves, crenels, and bizarre ventilation schemes that entice air- and water-elementals to flow through.  Likewise, urban sculptures and architectural adornments are widespread, to the point that the buildings can almost look barnacled in weird art-pieces.  Many of these move, creating a shifting play of sound and light along the city streets that can keep even the flightiest of wind-serpents entertained forever.

A nice example, by Anthony Howe.

The preponderance of such things is even greater in the two Academies sited in Gernaaken and Khrisken.  Separate campuses within the city limits, they are both experimentation-grounds for the artificers within their communities, and their buildings can and do change frequently.  The bulk of the Academy at Gernaaken is currently a ‘forest of towers’ with bridges and spiral walkways connecting them at all levels.  Several of those towers are also power-gathering pylons, seated deep enough into the bedrock to be able to draw on the vibration of any Rift activity in order to ameliorate its effects on the city — as well as power the Academy’s energy-supply and the city’s climate/defensive wards.  Excess energy (as during a large Riftquake) is expended into the sky like lightning from several towers, both central and peripheral, lest it overload the city’s arcanoelectrical network.

The existence of the city network is fairly recent, but already being extended into outlying areas to power small industries.  Urban spaces in Gejara can and often do have arcanoelectric lights, warming stations, semi-automated transit, and charging points for elementals, constructs and mages.  In fact, most urban residents of Gejara know enough magic to be able to draw energy from these points, to either empower personal wards and protections or call a small elemental for assistance.  Magic is commonplace here, in a way that would horrify any Imperial observer.

The difficulty now, for the Academy mages, is extending those amenities into the back-country. 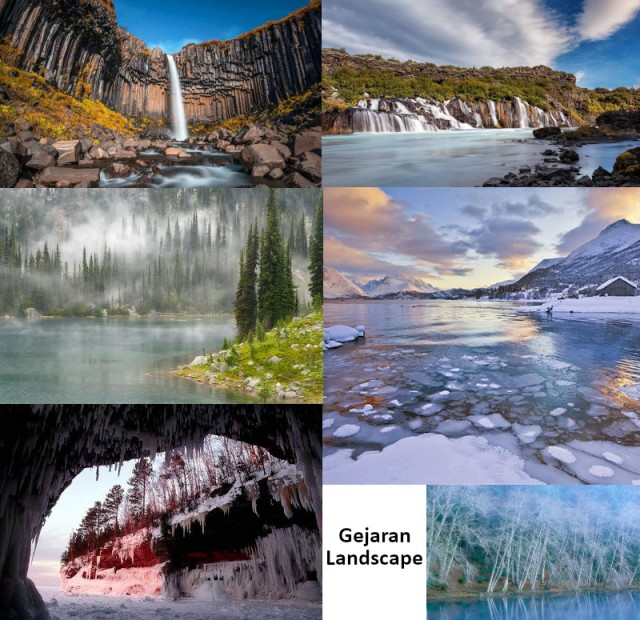 Like Krovichanka, Gejara is largely made up of taiga, with some tundra, some foothills regions, and a lot of coast.  While the densely populated urban areas are nicely arcanoelectrified, the difficulty of placing pylons out to the most distant regions has so far stalled much extension of these benefits.  People in more isolated regions have to rely on more traditional techniques of energy-harvesting and spirit/elemental management in order to get what they need from the environment.

And what they need is, mainly, hothouse foods.

A considerable percentage of Gejarans are either ogres or ogre-bloods, the descendants of the original Ogre Dominion residents who were driven north after the dominion’s destruction.  As very large herbivores, ogres require a lot of food — and as the previous masters of the continent, they came with very select, and very south- and midland-based, tastes.  The import of southern and midland fruits and vegetables came at a ruinous expense, and intermixing with the indigenous human population conferred only so much dietary benefit.  (The local humans had long been subsistence hunters and fisherfolk.)  And so, already on good terms with the spirits and elementals, the ogre-bloods of Gejara decided to use that power to turn the north green. 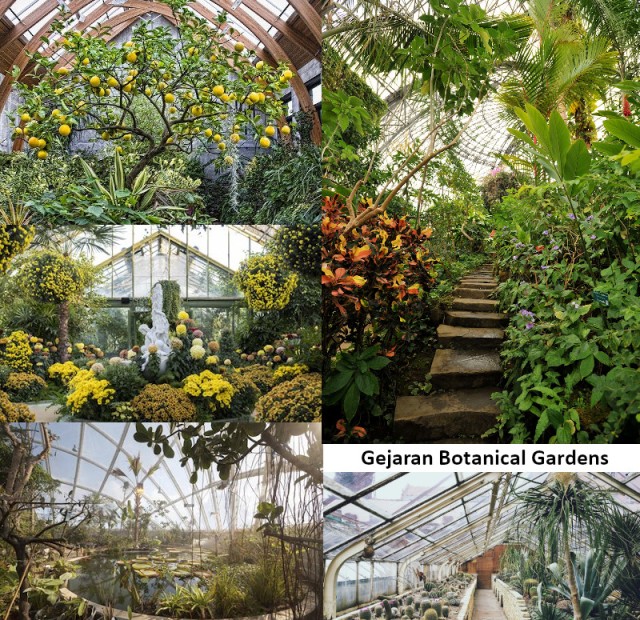 Protected gardens are everywhere in Gejaran territory.  Whether tiny cottage greenhouses or massive botanical gardens, the Gejarans now plant and protect everything they possibly can — including highly unsuitable but ‘nostalgic’ gardenscapes such as southern swamp and cactus collections.  Food gardens naturally predominate, but it’s a rare Gejaran indeed who doesn’t enjoy cultivating or at least basking in one of these encapsulated green spaces.  High-quality glass, temperature-modulating wards and elemental assistance all contribute to make Gejara the unlikely fruit-basket of the north.

All this adaptation to ogrish sensibilities can be seen in architecture as well.  Every floor in a Gejaran city is at least eighteen feet high, to allow head-clearance for even the tallest of full-blooded ogres.  Likewise, doorways are at least triple-wide from what humans would need, and roadways likewise.  Most furniture is massive, with stepstools available for smaller human types.  Outside of places that need to accommodate everyone, however, there are distinct stylistic differences. 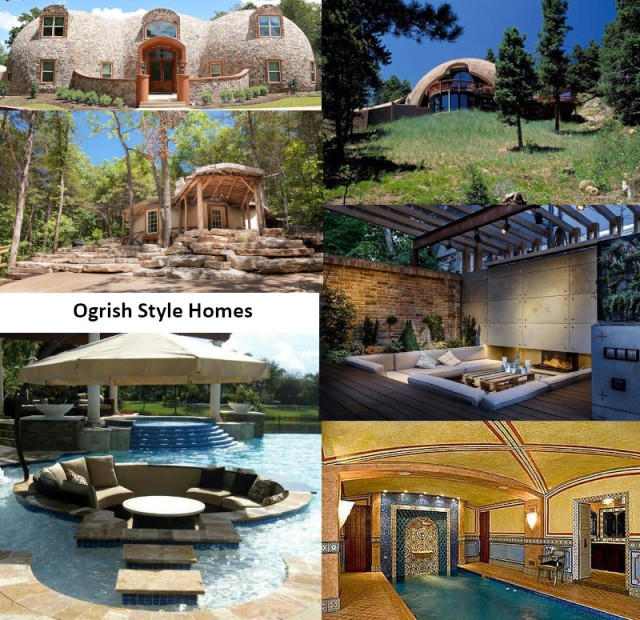 Ogres and strongly ogre-blooded folk have architectural preferences dating back to their original southern tribal roots.  A house without some sort of sunken bath is simply inadequate.  Other comfy sunken areas, for entertaining or sleeping, are highly sought-after, and a general rounded aesthetic predominates.

Humans, on the other hand, tend to default to the styles passed down from the indigenous human inhabitants.  A more squared building aesthetic and the use of saunas instead of in-ground bathing pools predominate.  They are also less settled than most Gejaran ogre-bloods, with many in the hinterlands and along the coast still living a similar lifestyle to their hunting and fishing ancestors.

Despite these lifestyle divides, Gejaran attire is itself a long-standing blend of southern ogrish and northern human styles.  Ogres have always favored large, loud, bold patterns, while northern humans tend toward long layers and practical wraps.  In combination, Gejarans tend to be quite easy to pick out from a crowd, particularly when wearing the now-traditional tapestry coats and robes.  Some say that those came about when the original ogrish refugees had nothing large enough to clothe themselves in except the natives’ traditional loomwork tapestries.  Others think they just like the look of the big bright pictures.

The colors in the garments seen above aren’t representative.  A lot of red there, but Gejaran garments can cover any and all color schemes, often clashing ones.  Likewise, the wig seen above is a fairly sedate one.  Full ogres, naturally hairless, are fascinated by hair, and many will happily wear ridiculously elaborate wigs or headdresses made up of false hair, fur, feathers, fabric and anything else that takes their fancy.

And now, some ogres in wigs: