Continuing the Culture Composites series, this will be a short one!  And require the use of a rather haphazard map.  The target this time is Muria, the hidden homeland of the silver elementals (or Muriae) and their Primordial, Brancir.  Muria can be thought of as an autonomous zone within the protectorate of Kerrindryr, existing mostly underground but also encompassing the external area of one particular large mountain — Ratrangas Garta, or Howling Spire.  The human city at its base, Thul Rei Tenko, is a part of Kerrindryr but considered under the protection of the Muriae, and is known to have a certain amount of infiltration from the Silver Folk.

On the map above, Muria and Ratrangas Garta are sited at that hard-to-see grey star.  Like the red star (Aekhaelesgeria) and the green (Du’i Oensha), Howling Spire is a Seal — one of the six elemental points that maintain the barrier that keeps Outsiders from invading the planet.  Kerrindryr sprawls in all directions through the mountains around it, with the eastern end being the Low Country and the mid- and western portions the High Country.

Ratrangas Garta/Howling Spire gets its name from the titanic silver spires that rise from the peak of the mountain, the remnant of an ancient (and aborted) attempt to harness the power of the stars.  If you imagine them just peeking up from the top of the mountain in the lower right-hand picture, that would be about right. 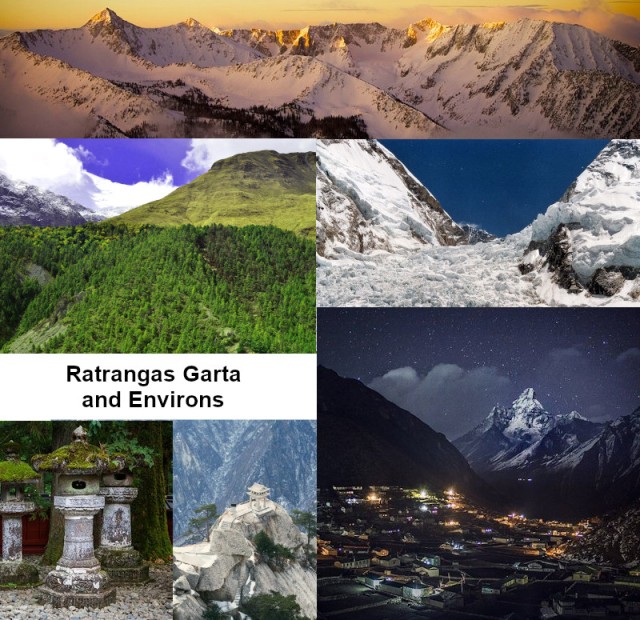 Life is no more difficult in Thul Rei Tenko than it is for most of Kerrindryr.  The city is just below the treeline, so its people can still log and forage, and the people hunt and herd goats and other animals.  Up on Ratrangas Garta and inside Muria, however, the situation is not so livable.  The excessive altitude coupled with limited airflow through the mountain’s tunnels and caverns makes it difficult to live in for long — not to mention the relentless cold on the surface, the sweltering heat in the depths, and the general lack of light or food cultivation.

The Muriae don’t care about any of that.

A people of literal living metal, the Muriae need neither food nor warmth nor sleep.  While they do require energy input to stay in motion (some but not all of which they receive from their Primordial), as long as they stay within the silver-veined shelter of their mountain they have permanent access to the electricity that the spires passively harvest from wind and lightning.  Over eons of occupancy, they have carved and grown their caverns into exactly what they wish them to be — including wild-seeming crystal gardens, ceiling homes accessible only by razor-thin walkways, towers clasped by braided stalactites, wirework and chiseled-stone libraries, power banks, submerged prisons, and a few human-safe visitor areas.  Illumination is supplied by complex apparatuses of light-shafts, crystal prisms and mirrors, comparatively simple electric arc lights (often encased in hollowed crystals), and the regular dangerous crackle of raw electricity.

Their Primordial, Brancir, keeps a central audience chamber with an enlarged wirework facsimile of her face, through which she holds court for her people as necessary and also addresses questions brought to her by mortal petitioners.  For individual queries from her own people, she can speak to them through their own metal — though the further away they are from her main mass at Muria, the more difficult it is to do so.  (The top middle image above is of course an H.R. Geiger image, but the ropy semi-organic metal aesthetic is highly appropriate to most ‘natural’ Muriae.)

Since their emergence into the surface world, some Muriae have chosen to spend long stints of time among mortals — particularly humans, and particularly after the assaults upon Kerrindryr and ‘their’ humans by those of other lands.  To this end, traveling Muriae have cobbled together a variety of tricks to look more like the mortals who surround them while not sacrificing too many of their natural advantages.  Silver threads, woven finely enough, can replicate that human thing called ‘hair’ while remaining as tough, flexible and damaging as a wire whip.  Slightly curved metal extrusions can pass for ‘nails’ while cutting like knives, and the human love for armor is hardly needed when one’s body is metal-plated beneath the painted pseudo-ceramic or silver-threaded synthetic ‘skin’.

Like all metal elementals, Muriae attempting to mimic humans do so with varying levels of facility — generally based on how much they actually care about the facade.  A Silver One with little concern for uncanny-valley reactions in its human acquaintances might mock up a roughly humanoid form, take a dip in a bioceramic vat, stick on some fake eyes, mold a fixed grin, then go terrorize people for a few hours before peeling the whole surface off.

One invested in its masquerade, on the other hand, will make an effort to weave false bone structure and musculature beneath the ‘skin’, select the best dip-vat option among the current ceramic and latex tests, and paint on skin tone and features appropriate to both the people they plan to meet and the personality they wish to convey.  The most sophisticated efforts can create nearly lifelike effects — though because this often requires fine manual manipulation of expressions via silver filaments in the ‘skin’, these masquerades are energy-intensive and exhausting.  Still, for Muriae who wish to live among or even intermarry with the humans, the effort can be worthwhile. 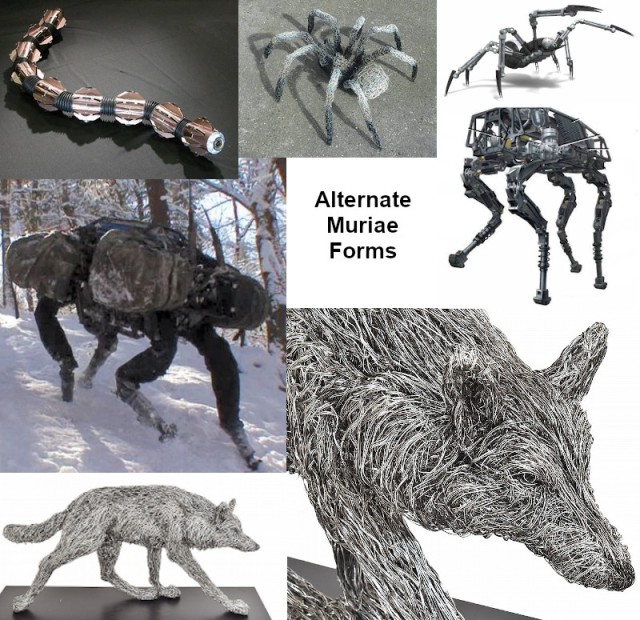 Other Muriae…just don’t care about humans.  They might be interested in other creatures — either aesthetically or practically — or disinterested in non-metals entirely, and make no effort to bend their forms toward the humanoid.  Every Silver One begins ‘life’ as a large tangle of native silver, and so the only limit on their identity-expression is their own imagination.  Some spend their entire existence flowing between wirework tumbleweed, snake and spider forms, rarely bothering with the outside world or even their kin.  Others collect dead metal into themselves and grow to titanic size, becoming reservoirs of memory and sometimes avengers upon the humans who caused those deaths.

Brancir, their Primordial, has for a long time tried to soothe such vengeful acts.  As the third of the Trifold Goddess, she joined Brigydde and Breana in part to stop the humans’ depredations upon her people and the Kerrindrixi who served them.  Through the Trifold’s influence, she hoped to blunt humanity’s aggressive lust for metals and turn their attention to other sources of materials.  While the legal trade in silver did taper off, this only made it more valuable in certain eyes.  That battle is still ongoing.

Finally, shown above are four book-noteworthy individuals from the Muria/Ratrangas Garta area or otherwise linked to it.  Brancir, as noted, is the Silver Primordial — the core intelligence within the element.  As a nod to the theme of her two partners in the Trifold Goddess, she calls herself female.  Likewise, Yesai Miun (or Jessamyn) Enkhaelen chose to present as female during the time in which she wandered the world and made the mistake of marrying That Asshole, necromancer Shaidaxi Enkhaelen.  Dernyel, while not a Silver One, did serve them directly in Muria for a time, and met his future wife Liska there when she came to talk to Brancir about the newest Imperial assaults against the Kerrindrixi.

Any questions?  Ask away!