A bit late this week, but I got nabbed to do actual Social Things last night when normally I would have been hammering out a post, so!  I’m not terribly social on my own, and therefore must take the opportunity when it presents itself.

Today’s (or, well, yesterday’s) Tough Traveling deals with the trope of Companions.  I couldn’t not do this one, really, because though Book 1 doesn’t saddle Cob with an adventuring party, Book 2 assembles one around him pretty quickly.  And with some grease and a crowbar, most of his cohorts can fit into at least one of the Companion roles.

A few of them might need a mallet though.  Bash bash bash.

Companions are chosen for you by the Management.  You will normally meet them for the first time at the outset of the Tour.  They are picked from among the following: Bard, Female Mercenary, Gay Mage, Imperious Female, Large Man, Serious Soldier, Slender Youth, Small Man, Talented Girl, Teenage Boy, Unpleasant Stranger, and Wise Old Stranger.  Most parties will have at least one of these and may include one or two of the other Peoples, usually small ones.

Lark of Bahlaer.  Though I usually play her as a bard- or rogue-class when I haul her out for a MMO, she’s not a Bard — she can sing when she’s drunk and that’s about it.  Nor would she actually be classified as a rogue.  As a liaison between the Shadow Folk, the goblins and the government of the city of Bahlaer, she’s more of a diplomat who happens to be handy with a crossbow, and is probably closest to the Imperious Female.  Except that instead of ‘sweep[ing] into the Inn at the Starting Point’ of the story to demand that the hero do things her way, she was already there in the Merry Tom Tavern to drag Cob out of one type of trouble and into another.  (And it’s not at the starting point.)

She has her share of knowledge and does her share of rescuing the group, but since she’s not from any of the books I grew up on, she’s not a princess in disguise (Ce’Nedra!  Laurana!).  She’s just very confident in putting her foot down — preferably on Cob’s toes.  And she’s definitely not afraid to complain about the conditions on the party’s trek, or any of the hare-brained plans they hatch.

“Fortunately for you, we don’t kill people just because they act like idiots.”

Arik.  Look at that big sassy hunk of man.  Er…wolf-man.  Arik is kind of stuck as the Large Man by default, but that’s too bad, since the Large Man is defined as ‘very calm, very strong, and not at all stupid’.  Now, the calm doesn’t really fit, because most of the time Arik hangs out in wolf-form pretending to be the friendliest dog in the world.  (At least, when Cob is around.)  But he’s certainly strong, and he knows what he’s doing.  He was never a blacksmith or a slave, but he could be one of the ‘Barbary Viking’ types; he doesn’t mind killing people.  Sometimes with other people.

In fact, he’s one of the characters that I’ve borrowed from friends (with permission) to feature in the story, and one of the games he’s been in has him as very much a barbarian — just not a Viking.  (I think.  Deb!!  Has he ever been a Viking?!)

Fiora Kinrick.  One of my reviewers has called her a ‘religious warrior-babe’, which is about right, though you’d never find her flouncing around in a chainmail bikini as the ‘babe’ part of that tends to indicate.  (Also, this is a preliminary picture — I’m not satisfied with her hair.  RAARH!)

Of all the Companion roles, she is most likely the Talented Girl, because although she doesn’t have that trope’s potential as a magic-user, she does have a ‘highly spirited and resourceful personality’ which does cause her to ‘argue with her Tour Companions’.  Like, a lot.  Especially after what happened at the end of Book 2.  The Talented Girl entry points out that color-coding with hair and eyes is a big deal with some of these old tropes, but I’m kind of allergic to it and have carried that over into the world; the typical Talented Girl, according to the entry, is a blonde or redhead with green or blue eyes — a set of combinations which pretty much don’t exist in this world.  Fiora is a brunette with hazel eyes, so the Tough Guide can stick it.

She’s also kind of in the Slender Youth role, which is usually either a boy or a girl disguised as a boy and tends to be ignorant and hot-headed.  Which…yes.

Ilshenrir Eisaia je’sa Vallindas.  Back in the day, when I thought of my wraiths more as elves and less as origami space angels, Ilshenrir would have been the Gay Mage.  ‘He’ still more or less fits the type, particularly in the appearance department: just look at that hair!  Apparently flowing blond hair is a staple of gay mages.  And much else is correct, in that ‘he will not like to fight or to be angry with people’ (in that he doesn’t seem to find any enjoyment in fighting nor does he seem capable of anger), and ‘he will be surprisingly strong, competent, and determined, and he will be very good at Magic indeed’.

And okay, I like this entry because it tells us ‘You will find him giving you a back rub and aromatherapy late in the Tour at some point when he ought to be dead.’  Ha!  Can’t kill the gay mage, villains!  I don’t know if I’ve actually ever seen examples of this trope; there’s a fragile prettyboy mage in ‘The Death of the Necromancer’, and I guess there’s Vanyel Ashkevron, but I sure as hell can’t see him giving aromatherapy to anyone.

Neither would Ilshenrir.  I don’t think he has a sense of smell.  And it’s probably not a great idea to accept a back rub from a crystalline creature covered in a thin fake skin.  He does have a love interest, in a way, but that’s in his backstory, and as they’re both genderless amorphous light-beings trapped in crystal shells, human sexual orientations don’t really apply to them.

I always wanted some dialogue where the girls ask him why he decided to manifest male, and him saying that human males ‘seem to attract less scrutiny’, and them telling him how much he failed.  But I’ve never been able to fit it in. 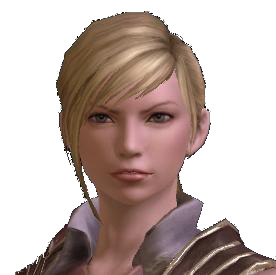 Dasira te’Navrin.  This exceedingly aggressive individual is much more a Serious Soldier than the Female Mercenary she purports to be.  You can ‘rely on her absolutely in a fight’, yes, but she won’t spontaneously have any magical Visions and she came from anything but a Nunnery.  (If anyone came from a Nunnery, it’s Fiora.)  She’s also not tall, thin, wiry or neurotic, but she is mostly silent.  (I believe she’s 5’0″, shorter than Fiora.)

Anyway, the Serious Soldier is ‘usually on the Tour to guard someone, and has no interest in it otherwise’, which is pretty much true.

Seriously though, Das, don’t stab me.

Beyond his direct companions, Cob has also run into an obvious Unpleasant Stranger and a just-as-obvious Wise Old Stranger.  Unlike his actual companions, who had to be shoehorned into these roles, those two play their parts purposefully.  The Unpleasant Stranger ‘is a Tour Companion whom no one likes or trusts.  Usually the stranger is male and neither young nor old.  He can be either sly and ingratiating or gruff and taciturn, and sets everyone’s back up and teeth on edge’.

Well…all right, I guess no one can call Morshoc ingratiating.  More like a snide pain in the ass.

Meanwhile, the Wise Old Stranger is ‘usually a Magic User and possibly your Tour Mentor.  In neither case should a Tourist be rude to him, though he will often be extremely irritating’.  Yeah, Jasper, with all your stories and cryptic commentary!  Granted, Morshoc finds him more irritating than Cob does.

As noted, these two are on purpose.  And they are both aware of it.  I mentioned in a previous Tough Traveling that I wanted to throw a variety of bickering Mentors at Cob — all of them with their good points and their flaws, though some more obvious than others.  There is no One True Way out of the predicament Cob’s found himself in, and his world reflects that.

Looking back over the Companions though, I’m more inclined to hit up TVTropes and call them the Five-Man Band.  If Cob wasn’t around, Fiora would be the Leader, Dasira the Lancer, Ilshenrir the Smart Guy, Arik the Big Guy, and Lark the Chick.

And then it would all devolve into mayhem as the Leader and the Lancer try to kill each other.  So let’s not do that.

If Cob was the Leader, then Fiora and Dasira would split the Lancer role.  Be like a little shoulder-angel and -devil.  The question, then, is: which is which?

((Note: Color images are screenshots from the Aion character creator.  Some day they will have portraits too!))