I’d meant to do this post a while back, but I never got around to finishing the write-up.  Alas.  Anyway, since I have nothing to say for today’s Tough Traveling with Fantasy Review Barn, I decided to drag this one out and finish it.  The two creatures/races it deals with have a big impact on the story-world, even if they haven’t gotten the spotlight yet, and I have just enough art of them to do a proper post.

Even if some of it is my own dreadful art.

Also, there is ogrish nudity.  You’ve been warned.

The first truly civilized race in this world, ogres originated the practices of farming, village-living, dam-building, irrigation, indoor plumbing, and various other early innovations…but not fire or cooking or clothing, which were brought to them by their less hardy and more prudish neighbors.  Though staunch vegetarians in their native tropical clime, those ogres who settled in the north — and then were pushed further into the tundra — have adapted to a more calorie-dense omnivorous diet despite that it can be detrimental to their late-life health.

As one of the largest races — ranging in height from 8′ to 12′ depending on subtype — ogres generally find it easy to dominate their neighbors through strength.  However, while they can be quite territorial, they do not like to live far from large bodies of water and thus will not expand into arid, rocky or forested environments unless there is a convenient place to make an artificial lake.  They will also tolerate other races living around or among them as long as they accept the ogres’ dominance or equality; they will not be treated as second-class citizens.

Though they are technically skinchangers, they are one of the ‘locked’ types who do not shapeshift.  They are still bound to their spirit, Oega the River Wader, and as such have no ability to learn arcane magic, but most are not hostile toward it and show respect toward arcane practitioners.  Ogres can also breed with other skinchangers and with humans; progeny from both types of union are called ogre-bloods and show many ogrish traits (including size) but are biologically human. 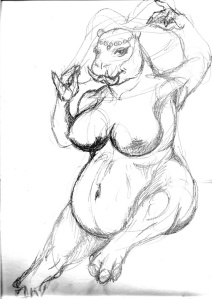 Generally speaking, ogres are naturally hairless but may have patches of bristles on the scalp, jaw, and back — and often wear wigs, because they find hair fascinating.   Their thick skin and dense layers of fat make them difficult to hurt and fairly resistant to cold weather, as well as comfortably buoyant.  Unlike the majority of the world’s races, they have only four digits per hand/foot.

More specifically, the ogres of the north are split into three tribes — previously four.  The Voryeshki ogres are the tallest, though not always the broadest, and known for their reddish skin-tone and long tusks.  Those that do not live in Gejaran or Krovichankan cities tend to dwell on the taiga and along the shore of the Sea of Ice.  They are considered the friendliest of the northern tribes and are the most likely to mix their blood with that of other peoples.

The Ghesjek ogres are the shortest and darkest, varying in tone but usually a deep brownish-purple, and have stubby tusks that impede their speech only minimally.  While they are considered the most hostile of the tribes, this is more because they have only recently been ousted from their territory in the Daecian Swamp than because of a greater natural aggression.  They live in the southern parts of the taiga and patches of the east coast, with only a few tribal representatives dwelling in Gejaran or Krovichankan cities.

Finally, the Leshya-Naanja live in the northern foothills of the Khaeleokiel Range, where volcanic hot-springs make life tolerable despite the bitter winds.  They are sometimes called ‘forest ogres’, and have adapted a mottled avocado or olive skin tone with greyish undertones.  While not exactly friendly, they do trade with their human and skinchanger neighbors, but have been known to attack Imperial outposts without provocation.  They have moderately-sized tusks and larger eyes than the other tribes’, and tend to be standoffish even among fellow ogres.  They are also the most vegetarian.

As for the southern ogres, they may bear resemblance to any of the three or to the original sooty-brown baseline.  They live in innumerable small tribes — some no bigger than an extended family — either in isolation along the rivers and coasts and swamps or as enclaves within the many human cities.  The original ogrish settlements were wiped out long ago by natural disasters and hostile skinchangers, and so these returned and remnant ogres are just a small (but still formidable) population in their home territory, heavily outnumbered by their own mixed-blood offspring.

These denizens of the Shadow Realm can be found anywhere that shadows gather, though they are not normally visible.  As the souls of children who died before they were named — and thus could not be claimed by the Goddess of Death — they often congregate where other children are, both to play with them and to protect them.  Children under the eyes of the eiyets have been rescued from kidnappers, defended from abusers, and guided home when lost, but no adult will find such kind treatment from these shadow creatures; those who try to harm children under their care will be found mangled to unrecognizability.

The Shadow Folk (or Kheri) who inhabit the Shadow Realm alongside the eiyets often take advantage of their connection to the physical world, by inducing them to aggregate into eiyenbridges that the Kheri can then traverse.  Using an eiyenbridge to pass from the Shadow to the real (or vice versa) is a dangerous proposition, though.  Eiyets can sense fear, sickness, hostility, corruption and various spiritual markers, and have been known to attack people in mid-crossing even if they initially let them in.  Additionally, eiyets are prankish, playful and kleptomaniacal, forcing the Kheri to dedicate a lot of time to replacing what they’ve stolen.

(I drew the picture above.  Imagine the eiyet as made entirely of matte black spiky stuff, with only the eyes reflective, chewing on a coin about the size of a quarter.  Nom nom nom.  Now imagine a bridge made out of them.)