One of the things I have always been certain about with my world is that it is not a Standard Medieval Setting.  In fact, the first version I worked on was maybe 300 years in the future of the current version, with arcanotech and clockpunk elements.  (That’s still the future.  I’ll get to it eventually.)

The problem is that not all areas of the world are at the same tech level, so when someone asks me about it, I can’t give an overall summation.  There are some cultures still using stone tools yet situated right next to others wielding magically-wrought steel; there are some cities sitting on abundant resources that won’t access them because of religious reasons, while their neighbors are perfectly happy to exploit less-productive sites.

To add to that, Halci has some handicaps to industrialization for the areas that would be thinking along those lines.  There is very little coal, no petroleum or natural gas (for various spoilery reasons) , and no rubber trees.  Old drafts had cannons in use, with the requisite gunpowder, but I changed my mind in terms of the Empire’s access — though the world does have gunpowder elsewhere and it will be more widespread in the future.

Anyway, lack of oil and rubber cuts out a lot of modern transportation options, and limited coal and gas is problematic for such basics as home-heating.  Since I also have no sea mammals (thus no whaling for oil), I have to look at other options — and also the impact those options have on the cultures that use them.

Below is an idealized power-source map:

I say ‘idealized’ because many of these options are projections rather than actual current-use sources.  More like ‘power source access’.

Going from the top, the orange Peat/Coal areas are already being exploited, though not necessarily to the marked degree.  The red Geothermal areas are also being exploited, though by goblins rather than humans (and there are other geothermal-usage spots active underneath human civilization in various places, I just didn’t want to muck with the map too much).  Animal/Plant Oil in magenta covers some oilgrass crops, but mostly the harvesting of eels (those magenta rivers) and oilfish similar to the golomyanka (the coastlines).

Purple and dark blue (tide/wave and hydro) are also currently in use along their ranges, though not to potential capacity.  Tidal power mostly captures incoming water in tidal pools and then generates energy when the tide goes out again; wave power uses ocean currents and requires a bit more work; hydro captures the energy of waterfalls and rivers.  Tide and hydro are both commonly used to power mills in their areas (for flour, lumber, paper and metalwork).

Wind power is spotty.  Windmills are in use through much of the central corridor for milling grain and pumping groundwater, but the light blue bands elsewhere (especially along the southwest coast) are mostly possibility, not actual.  Current wind technology along the southern part of the central band is nearly up to the level of the turbine, just lacking an electrical system into which to feed.

Wood is fairly self-explanatory.  Problematic is that many of the wood-producing areas are under the control of skinchanger tribes or wraiths who do not want their lands exploited.  In that regard, the green bands just represent the penetration of logging into forested areas for the purpose of power production.

Next, in tan, is solar power — though not yet in the modern electric sense.  Mostly the use is as solar ovens, stills, home and water heaters and disinfectors, and also as combination salt/solar ponds in the northeast corner — the Faded Sea salt flats of Riddian.

Last are the yellow arcane spots, which could tie all the potential sources together but have not managed it yet.  Arcanotech’s most promising aspect is that it can make batteries — not chemically but through channeling and binding energy into objects, usually specially-prepared glass or wraith crystal.  (Okay, there is a bit of chemistry involved.)  Arcane ‘batteries’ already power all magical items; the spells bound into those items slowly decay as the energy initially imbued into them is depleted by use, until they are either recharged or become mundane.  The leap not yet taken is to create an energy-distribution network, rather than relying on battery-type enchantments, to circulate excess arcane energies throughout the land for electricity-type purposes.

Some progress has been made toward that end in Gejara (center north) and Yezad (center south), but Yezad is slowly lapsing into theocracy and Gejara has problems with focusing on the practical.  Conversely, the idea of networks exists within the Empire (mid-northeast) but the capacity is not yet there, especially with the fractious nature of the local mage organizations.

Even without networks, life in arcane areas tends to involve arcane lighting, temperature control, transportation and sanitation.  The Psycher Weave in the Empire also supplies information storage and retrieval — and probably a bit of entertainment for those authorized to access it.  However, arcane communities are very insular, so do not extend their benefits far from their own walls.

All of this suppresses the general tech level to a wooden-wheeled, windmill-horizoned, peat-burning pre-industrial situation, even if there are bright spots here and there.  But energy production is not the only measure of technology…

As mentioned before, there are Stone Age cultures living alongside barely pre-industrial ones.  The reason for this is metals access.  Several cultures will not mine their land out of respect for the elemental spirits (for example, the Corvish) and so sit on deposits of ore that lure other cultures into attacking them; other cultures are on good terms with the local elementals and are thus gifted metals willingly by those elementals.

The orange sections on this map show areas that either have no access to metals or refuse to mine/use them due to cultural reasons.  The red sections show cultures willing to mine/use metals but with no access to iron, either due to local deficiency or active elemental resistance.  The magenta areas are in trade-relationships with an iron/steel provider; the purple can get limited amounts of steel as gifts or through their own work; and the light blue has easy and widespread access to iron and steel.

Additionally (and generally as a subset of the light blue Widespread Steel option), there are goblin-controlled places where clockwork technology is being advanced or has even come to the surface into common use.  Likewise, the tan Artificing spots indicate a confluence of metals-access and arcane magic, capable of producing the enchanted items and arcane batteries mentioned above.

Education being a huge factor of advancement in technology, it helps to know who has access to what.  Halion reckoning splits the stages of life into several six-year segments, and this is generally true with its education schema.  Orange is the most basic of education levels: first language, numbers and letters, shapes and colors, and practical abilities suited to the culture, which are usually taught by the parents between the ages of one and six.

Age seven is the beginning of primary education — the ‘apprentice’ stage in arcane parlance, featured in red.  This may cover a military education as in Trivestes, an actual apprenticeship to a mage or a skilled professional, or a more general education by priests/priestesses or tutors.  Literacy, early math, philosophy, history and sometimes an introduction to theology, ethics or logic are the defining features.

Most of the ‘civilized’ world has an access-level at least one step higher; only fringe or unstable territories like Kerrindryr, Szari-Nak, Krovichanka and the Garnet Mountain Territory provide this as the average.  For Kerrindryr and the GMT, survival counts more than knowledge; for Szari-Nak and Krovichanka, raiding and war take precedence.

Age thirteen begins secondary education for those afforded it.  ‘Journeyman’ education (in magenta) can involve the specifics of a trade, a continued general education, officer training in military schools, vocational training for priests, or selection for arcane study — as most mentalists ‘manifest’ around this age.  Journeyman-level education is a requirement for tradesmen, merchants, managers and theologians, so is considered the norm in the mercantile kingdoms and territories.

Age nineteen begins tertiary, or ‘Adept’, education.  In dark blue, it is the level of scribes, librarians, most practical mages (including necromancers), trade specialists, high priests and priestesses, and professional advisors.  Nineteen is also the age of majority throughout most of the known world (except the Empire, where it has been dropped to eighteen), so any Adept is considered a full adult, and all Adept-level education is voluntary.  The more knowledge-based kingdoms tend to have Adept-level averages, though rarely throughout their entire area.  Gejara and Averogne stand as one Adept-level bloc, with Padras, Yezad and Zhangi-Uru as another and Ciritheen as a third; central Xiroacer also has a high education level, though mostly in theology and necromancy.

Finally, Master level ‘starts’ at 25, though that is just a traditional number due to the rule of sixes.  In truth, Adept level can last forever as practical learners expand their skills, while Mastery only starts when the practical is abandoned for the theoretical.  No Master-level civilization currently exists, but Master-level enclaves dominate all of the university-, mage- and wraith-cities.  The vast majority of Master-level students are mages of some sort, though there are pure scholars (particularly in Taradzur) and pure theologians (in Serinhur and Temakish) as well as a few theoretical scientists in Gejara.

Last, there is some gender bias in certain territories.  Jernizan does not educate its women beyond the practical basics, but it does train them for combat.  The Risen Phoenix Empire has instituted a ban on female education which is somewhat obeyed.  Xiroacer does not educate its males, though again they are trained for combat; likewise with the matriarchal Ibe-Wum lizardfolk of the Forest of Cloud Serpents.

Finally, as an addendum to the education levels, the Text Access Map!

The orange areas preserve their writings in clay or stone tablets, and/or use slate and chalk for non-permanent writing.

The red bands use beeswax tablets and styluses for non-permanent writing.

The magenta bands use paper (usually made from bark, reeds, veilgrass/shroudgrass, razorgrass/needlegrass, or rarely wood pulp) and ink as either disposable or permanent writing material.  Paper may be collected in book form or as scrolls.

The dark blue dots indicate cities where illuminated texts are commonly drawn and compiled.  These places will include general scribal services and bookbinding as well.

The light blue dots indicate cities with at least one active printing press.  The Phoenix Empire discourages printing (and literacy in general) but the Citadel at Valent and the Hawk’s Pride will not be denied, and the Trivesteans just ignore that mandate.  Gejara is a hotbed of printing activity, and Yezad — as the former stronghold of the Goddess of Knowledge — has been printing books for thousands of years.  Its influence extends to its neighbors and former vassals.

The green dots indicate cities with active newspapers or regular newspaper delivery.  Yezad has let its newspaper tradition decay in the past century, but Zhang and Gejara both have active newspaper business which deliver beyond the reach of their physical presses.  Gejara even has niche markets.

The tan dots indicate the presence of public libraries within the indicated cities. Yezad and its former lands predominate due to their religious history, but all of the mage cities and a few associated communities (including the Trifold enclave of Turo in the Phoenix Empire) stock and staff libraries for the sake of the public.

Finally, the yellow dots indicate the presence of a formal university — either a mage academy or a research institution.  The yellow dot on the upper right is the Citadel at Valent; slightly left of it is the Hawk’s Pride.  All can accommodate a Master-level education, though the Hawk’s Pride is dragged down somewhat due to being a military-mage academy rather than one for theoretical magic.

As a side-note, while the education levels superficially resemble mage-titles, mages do not ascend the ranks by age but by skill and testing.  Mage ranks go: 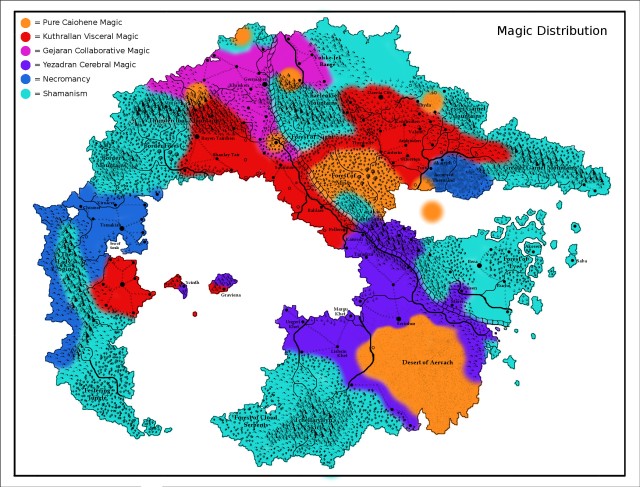