I am just now getting around to some of the standard post-book-release info discussions that I used to do immediately.  Guess I’ve been in a blogging slump.  Book 5 editing continues apace, so consider this a mini-update on that, but as for the Book 4 titles…

Let’s start with Book 4 itself.  The Drowning Dark was not its original title.  As with most of the series, I’ve gone back and forth on which title to use for which book, and usually scrapped a few alternate titles during the writing process as I decided which did or didn’t work for the book’s main themes.  Book 4 started off as The Bloodied Army, and in fact the old copies of Book 3 still have that listed as the ‘next book’ — something I shouldn’t have put in while I was still semi-undecided.  Oops! 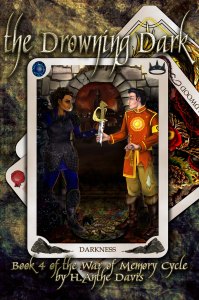 What made me push The Bloodied Army onto Book 5 was that I realized it was much more relevant to what would be going on there (a lot of stuff in the army camp), as opposed to what occurred in Book 4 (a lot of stuff with the Shadow Folk/in Bahlaer/etc).  The Drowning Dark had been Book 5’s proposed title, but with TBA being pushed onto it, TDD got shifted back; there was plenty of Dark business going on in Book 4, so it suited well enough.  Combined with the cover, with its Darkness card and Shadow Folk influence, it turned out to be good enough.

‘Good enough??’ you say?  Well, I do wish I had more actual Dark content in the story.  I’d intended for more when I’d first outlined it, but ended up not developing it as much — for various reasons, one of them being character sanity.  Everybody’s having a rough enough time as it is, and I didn’t feel the need to compound it.  (Yet.)

Moving on from the book title, I also have the story split, as usual, into two parts.  As a continuing series, this gives me Part 7: Per Aspera, and Part 8: Interregnum.

Per Aspera is the first part of the phrase ‘per aspera ad astra’, or ‘through hardship to the stars’.  Basically, through struggle to success.  Except here, there’s no Ad Astra — not yet, and maybe not ever.  This is right after the great clash in the Palace and the placing of the first Seal, with its uncomfortable revelation about darkness and light.  Will there ever be the stars?

I can’t say.  For now, there’s just the hardship.

After that comes Part 8: Interregnum, or a period when normal government is suspended, especially between reigns.  (Inter-regnum…yep.)  With communications restricted or cut and leadership in disarray, the major characters must lead themselves through the unfolding disasters without the guidance of their traditional authorities.  Some prefer it this way.  Others can’t cope.

And now for the chapter titles.  Some are fancy-ass concepts like the Part names above.  Others are song lyrics.  Still others are just straight-forward commentary on what goes on in those chapters.  I keep a huge list of potential story/chapter/book titles, and slot them in wherever appropriate, but not everything can make the cut.

1: Fixers — The original first-draft title for this was Unfixable, but since the characters ended up fairly optimistic about their plan, I altered it to reflect that.  Certain of my beta readers get on me if my stuff starts getting too gloomy, so one must adapt when necessary.  >_>

2: Reunion — Just an obvious reference to what’s going on.  Sort of.

3: Dark City — Both a comment on the setting and also because I love the movie Dark City.  Not that there’s any relation between a movie about memory distortion and soul-stealing in a sunless world and my story…

4: Hunting the Hunters — A reflection on predators and prey, a little bit related to a book 1 chapter title, Hunter in the Farmland.

5: View from a Realm — Both what’s actually happening and a reference to a song, Project Pitchfork – View from a Throne.  The take-away I always got from this song was to stop waiting for an answer from on high, and instead try acting on your own impetus.

6: Welcome to Infamy, 7: Bitter Amnesty, 8: Handmade Horrors, 9: Vulnerability, 10: Approach and Withdrawal — Just titles I liked and thought were appropriate, off my great big list of potentials.

11: First and Final Offer — Again, relevant to what’s going on between characters (can former enemies extend help to each other?  are they even really ‘former’?), as well as an alteration of a song title.  This one is Absurd Minds – I Offer It Just Once.

12: Ghosts of the Grey — I’ve been holding on to this title for a long time, and though it’s not directly inspired, anything related to the Grey is at least somewhat touched by this song: Diorama – Exit the Grey.  The character of Ilshenrir is also closely related to this song — or at least how I first played him, when I created him in the Vanguard MMO.  Still relevant now, just in a very different way.  –Anyhow, Ilshenrir isn’t even in this book, so what the heck am I talking about?

15: Ticks and Leeches — Title borrowed from a Tool song, which while not my favorite, certainly expresses some of my feelings toward the antagonists.

19: The Rule of Force — I tweaked this from a nonfiction book I read a while back, The Utility of Force, by Rupert Smith.  Maybe not the best fit for this chapter, though themes of war’s misuse certainly influence all the characters involved.

20: Phantom Limbs — Well, ahem, what can I say about this?  Beside that it’s twofold: not just about phantom limb sensations but about memory as a sort of extra appendage that itches at us and can’t be successfully scratched.

21: Black Blade — Both a direct reference to the akarriden blades and a yoink of this song, instrumental though it is: Two Steps From Hell – Black Blade.

24: Precipice — I called this Sarovy’s Book 1 character song (VNV Nation – Precipice) but here it is again.  Sarovy is just…all kinds of trouble.

29: Fall or Fly — Not a direct title or a direct quote, but somewhat influenced by Seabound – The Promise.  ‘Will we learn to fly, or fall and fade away?’

30: Recovery — As much as such a thing can happen at this point.

And then, instead of a Coda as in most of the books, my last section is titled Bridge.  In a work of music, a coda is a concluding passage of a movement, while a bridge is meant to both reflect on the earlier portions of the work and to prepare the listener for the climax.  It’s a section of contrast that usually comes around the beginning of the last third of the song — as it is here, bridging between the fourth and fifth book.  Nothing is concluded.  In fact, something new has begun.

And that’s Book 4!  Stay tuned for more background info on The Drowning Dark, and eventually the music of The Bloodied Army.

Worldbuilder. Self-published writer.
View all posts by H. Anthe Davis →
This entry was posted in Writing and tagged writing. Bookmark the permalink.