Trope Roulette: My Instincts Are Showing

It’s been a while, but I’m ready for a second installment of Trope Roulette!  The idea is to visit that evil time-sink of a site, TVTropes, and hit the Random button until I find something I can talk about.  This time it took eleven tries before I hit upon today’s subject.

The trope is defined thus:

A non-human character tries to live amongst humans. Or maybe a human character is made half-non-human. He does a good job of hiding his non-humanness, but occasionally his species’s normal (and non-human) behavior comes out.

Whatever the reason for a transformation may be, this is almost guaranteed to happen during or after shapeshifting. This may include food preferences unusual for their current form or other stereotypical behavior.

I’ve seen this a lot; with Urban Fantasy as a big genre now, there are plenty of werecreatures running around, whether in Jim Butcher’s novels or such TV fare as Being Human.  The trope page mentions Discworld werewolves too, but I haven’t read those specific books yet — Erica, don’t mash me!

It’s a useful trope for reminding readers/viewers that your characters aren’t entirely human — or if they are, that they’ve gone through an experience that has altered them in some way, if only briefly.

I decided to pick this trope because even though it’s about a small characterizing detail, the nature of my world makes it a pervasive element.  It’s been mentioned in reviews that the wolf skinchanger character in book 2, Arik, is always somewhat wolfish even in his human form, but I’ve been careful to fit a bit of that ‘animal instinct’ into all of the characters — because none of them are entirely human.

In my story world, humans are the result of crossbreeding between two or more different skinchanger types.  They’re a race of hybrids who only have a common appearance because that appearance was used as a ‘mask’ to keep the skinchanger clans from killing each other.  With hybridization, the mask became real — but many people still experience strong reactions and preferences based on their ancestors’ skinchanger types.

This shows up on a macro level too — politically, agriculturally, stylistically.  Certain cultures are vegetarian because the bulk of their population are a mix of herbivore heritages; others are largely carnivorous, or even obligate-carnivores, because of their own ancestry.  They may try to adapt to other cultures’ cuisines when visiting but can get sick or become malnourished because, below their human veneer, their bodies require different things. 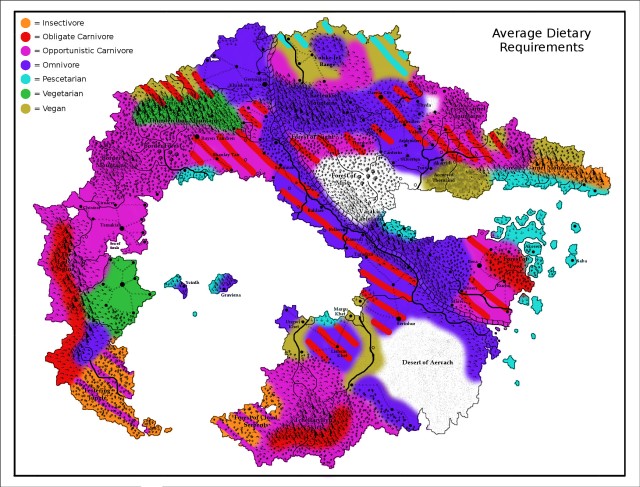 This dietary background brings out the occasional My Instincts Are Showing episode in the main protagonist, Cob, even though he doesn’t shapeshift.  His lineage is fairly mixed, but outside influences begin to strength one strand of his bloodline — the Stag — to the point that he loses the ability to tolerate meat.  He used to eat it (when he could get it) but suddenly it turns his stomach, and he finds himself absentmindedly eating twigs and leaves.

Other groups who act in occasional instinctual ways are the Riddish, who organize themselves into clans that are basically extended wolf-packs; the Trivesteans, who form strong pair-bonds but tend to consider everyone else an enemy, and who dwell as high up in towers and cliffs as possible, like eagles; and the Jernizen, who practice a peculiar type of female-dominated polygamy, rather like a lion pride.  Each of these groups has a secondary bloodline that also influences their behavior, but as a culture they have opted to embrace these over the others — intentionally or otherwise.

Almost all of the characters draw traits from their lineage, which is why I keep maps of skinchanger distribution and note characters’ lineages in my files.  How much of this actually gets expressed to a level that a reader might take note, I can’t say, but the possibility of an ‘Instincts’ moment always lurks there — for all of my characters.