This week, Fantasy Review Barn has chosen Minions for their Tough Traveling topic.  And I have a few of those, heh.

Though, after considering the details of the entry for a while and checking out Nathan’s selections, I don’t think I use them the way they usually are — to the point that I wonder if most of them even count as Minions anymore!

But on to the entry:

Minions of the Dark Lord are all over the place.  The Dark Lord has been busy planting them for years.  They can be either male or female.  All will be carefully supplied with the means to slaughter tourists appropriate to their station.

1. Males are bad Kings, puppet Kings, Dukes, Power-hungry usurpers, most High Priests, ambitious Merchant Feudalists, Barons, Courtiers, fat Princes, Evil Wizards, Regents, all Enemy Spies, and anyone who suddenly conquers a City just as the Tour arrives.  We must add to this Goblins, Trolls, and random Other Peoples.

2.  Females are Enchantresses, Evil Witches, some High Priestesses, and most bad Queens.

4. Undead or Demonic persons, most of them red-eyed, wearing black, and riding black steeds.  These persons always have formidable Magic and usually operate by night.  By day, they rely on brain-dead human soldiery (such as bad King’s Men) to keep up the pursuit.

Well now.  I’ll keep this fairly brief, because so many potential spoilers, but I do want to point out which named characters fit into which groups.

This definition separates the Minions pretty clearly from the lower level Mooks, who would probably be the ‘brain-dead human soldiery’ in #4.  And while I have a lot of personal examples for #1, most of them are such background characters that they haven’t even shown up!  I don’t like stories that revolve around lords and ladies, kings and queens — and even though the War of Memory series is set against the backdrop of an expansionist empire trying to absorb its neighbors, the action is not at all about politics or military pressure.  (Well…Cob’s part isn’t.)  It’s about a young man with no rank — an escaped slave — trying to come to terms with everything he’s been told and all the horrors those lies have wrought.

And then punching them.  Oh Cob. 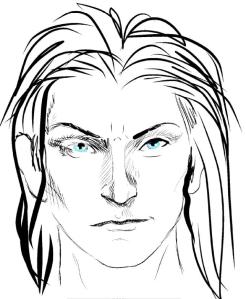 But anyway, not much direct engagement with kings and dukes and courtiers.  Instead, we have the Crown Prince (and commander of the Crimson Claw Army) Kelturin Aradysson, who would vehemently oppose being called a minion of his father even though he is;  Inquisitor Archmagus Enkhaelen (featured pic) who definitely falls somewhere on the Evil Wizard spectrum; Golden Wing General Lynned and Sapphire Eye General Demathry, who have been seen briefly but will come into the action in time; Lord Chancellor Caernahon, who I suppose is a Courtier type; and the Field Marshal and High Templar, Argus Rackmar.  Who…yes.

These are the Emperor’s close coterie of minions, all of whom have their own mooks.

Example #2 is harder to discuss, because in many respects, the Risen Phoenix Empire is deeply misogynist.  This means that there aren’t many women in positions of Minion-esque power, and those that are…might be more suited to a listing under #3.  This is not to say that there are no other forces at work that might employ female Minions, though…

Or, as people variously term them: Abominations, Specialists or The Blessed.

I can’t talk much about this, of course, because Book 3 fixates a lot on the mechanics and realities of them, but there are a few notable individuals that Cob has tangled with over the course of two books.  They all (so far) appear to be involved with the Three Armies or otherwise commanded by the Empire, but while they may profess a loyalty to the Emperor, they call Inquisitor Archmagus Enkhaelen their ‘Maker’, so…

Most important to the story is Darilan Trevere, Cob’s (former) best friend and our first introduction to the…let’s go with Specialists.  Darilan is the first to show us that some of the Imperial soldiers aren’t human — and also triggers the revelation that most of the Imperial soldiers don’t know there are nonhumans among them.  Brain-dead human soldiery indeed.

(Well, actually, brutally conditioned and mindwashed, but let’s not get into that here.)

Darilan also shows us that there are types of Specialists.  He’s what is called an aenkelagi, or bodythief.  There are also lagalaina like Lady Anniavela te’Couran (who would be a #2 if not for that whole Specialist thing), and sarisigi like that horrible grey clay thing that attacked Weshker, and at least five others.  From what we see of them, they certainly seem to be mutants and/or monsters, and have been apparently seeded throughout the Empire’s military and political holdings.

And then there are the difficult-to-class minions: the White Flames and the black-robes.  Both groups only step into the fray during the later parts of Book 2, and while we know roughly that Rackmar commands the White Flames and Enkhaelen controls the black-robes, whether or not either group actually classifies as Minions of the Empire or under which heading they should fall is…

…best left for Book 3, where we will put some names to the nastiness.

Worldbuilder. Self-published writer.
View all posts by H. Anthe Davis →
This entry was posted in World Info and tagged fantasy, tropes. Bookmark the permalink.
Loading Comments...
%d bloggers like this: