Influences: Pulse (and other Supernatural Horror)

I haven’t done an Influences post in a while, which is weird because I’d yet to talk about one of my biggest influences: supernatural horror.  I may present mostly the superficial fantasy trappings on this blog, but my dreams get darker…

Then again, I can’t really talk about the horror aspects because they’re full of spoilers.  So I’ll talk about horror media that I love. 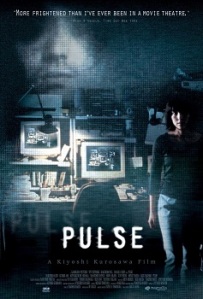 I’m a big fan of Japanese (and generalized Asian) horror.  I’m not sure quite when I picked the habit up; did I branch out to live-action horror movies after really enjoying anime as a teen, or was it an evolutionary convergence sort of thing?  One of my favorites is the original Pulse (Kairo), with its themes of ennui and social detachment, its disintegrating world and people….its slow and fatal slump into despair.

Yeah, I’m a real barrel of laughs, aren’t I?

There’s something about the mood and the threat in an Asian horror movie…  A sort of inevitability, a curse — something you can’t fight or even survive, but can sometimes redeem through sympathy.  That last bit is what gets lost in translation in most of the Western remakes: the fact that the supernatural monster is usually pitiable — a victim — and may be actively reaching out for comfort or to help, not really understanding that what it’s doing is terrifying and/or deadly.

In Pulse, the enemy isn’t even a monster; it’s the force of despair and the distance between people, and is a sort of meditation on the disconnection of the digital age.  The Western remake turned it into some kind of computer code boogeyman that could be attacked, but the only solution in the Japanese version is to…basically…keep wanting to live.

Some other favorites are One Missed Call and Into the Mirror, where sympathy for the creepy-critter saves lives.  Not always the case in things like The Grudge — where it is basically a contagious curse — or The Ring, which requires you to sacrifice someone else to save yourself, though the Ring sequels (at least the Western ones) made the creepy dead kid attach to the protagonist as if she just wanted a mother.

Well, for one, I can’t stand slasher/stalker/serial killer movies.  I don’t want my antagonists to be monstrous living humans.  If I wanted to see people-on-people violence, I’d turn on the news.  It’s weird, but in a way human beings seem less capable-of-being-reasoned-with than supernatural entities, at least when they’ve gone around the bend into slasher-land.  And I have to say that as a somewhat anxious person of the female gender, any of those goddamn cannibal hillbillies movies where it’s implied that the women are dragged back to be impregnated…just…no.  No thanks.  There’s enough of that in real life too.

So I guess I like my spooks to be either beyond human reason, or victims themselves that can potentially be assuaged.  A big component of supernatural horror is discovering why the haunting/curse/possession is happening, and then figuring out how to fix it.  There is something rational that can be done beside shooting the serial killer — something that is compassionate.  (Hey, probably why one of my favorite animated movies is ParaNorman.)

Or, in the case of the unreasonable spooks, there is no way to win — there is only escape.  Or conversion.

I want to bring up another few movies before I hit the other media.  I haven’t seen Oculus yet (though I’ve heard it’s good) but even from the trailer I knew it would hit some key love-hate points for me.  I’m mildly mirror-phobic, not for the reason some of my friends have (they see freaky things) but because I don’t really trust that person on the other side.  We all have an internalized image of ourselves which does not necessarily sync up with the person we see in the mirror, and for no good reason I find that I’m suspicious of that not-quite-the-way-I-see-myself person more often than not.  I smile and wave to let her know that I’m cool, but if she ever came out, who knows what she’d be like?  I have some creepy fish swimming around in my depths, and therefore so does she.

So movies that deal with doppelgangers or mirror-twins push some great horrified/fascinated buttons for me.  The best I’ve seen recently are The Broken and Plus One, and there’s also the clone-episode of Doctor Who that I think dealt with it really well.  If you meet someone exactly the same as you, how will you react to them?  What do you think will be going on in their head when they see you?  Who dies first?

Going along with that are possession-stories.  I have to say that I’m not into exorcism-stories; I think those are pretty boring, since they almost always turn out the same way.  Possessed person, some priests, possibly a skeptic, things go wrong, blah blah blah.  But that’s just what happens when we’re on the side of the exorcist, believing that they know what to do and that the possessing entity is entirely harmful.  What if one or the other of those isn’t true?

I shouldn’t talk too much about that, though, since I wouldn’t want to spoil The Shrine.  I just find the topic interesting, because it’s one of those that directly influenced my books rather than just flavoring them.  Cob is possessed.  Possession is a regular occurrence on his world, and considered beneficial by some but destructive by others.  How he, and they, react to it forms the base of the story, but what all those stories really get back to is the unknowable strangeness inside all of us.  Mental illness can unlock behaviors so unusual for the baseline personality of the sufferer that they seem to come from a different person; our internal, hidden lives may make us the polar opposite of what we present to the world; and the face in the mirror might not be a friend, for all sorts of terrible or just sorrowful reasons.

Speaking of monsters and explosions: Games!

I don’t play horror games because I’m an easily startled jumpscare-chicken.  Fortunately, there are many people on YouTube who are just as easily startled and chickenish, but have decided to make a living by taping themselves in the act, rather than just cowering behind the screen like I do.  So through them I have developed an appreciation for supernatural horror games, both mainstream and indie, like any of the Slender games or various Slender-clones, the SCP games like SCP Containment Breach, the Silent Hill series, Fatal Frame, Amnesia: The Dark Descent, and a zillion other games where the objectives are either to investigate, redeem or escape some supernatural entity…or all of the above.

(For some great playthroughs with entertaining personalities, check out Markiplier, Minx, or Cry.  I follow several others, but those three are my clear faves in the horror-gaming genre.)

(Speaking of Slender, MarbleHornets is a long-running found-footage-type YouTube…show, I guess?  With a supernatural premise, creepy happenings, and a great atmosphere of mental breakdown.)

(Speaking of SCP, if you like your horror in weirdly clinical scientific doses, check out The Foundation!  And for other creepypasta, try out….CreepyPasta!  v_v)

(And…and…speaking of creepypasta, and Cry, how about some Cry Reads Creepypastas?  You know you wanna…)

Okay.  I’m just going to leave this with a few books that hit the nail on the head for me in terms of spooks.  I don’t go in for the gore.  I want distress and defiance in the face of the inexplicable, I want protagonists who do the wrong thing and get people killed, I want characters who distrust the thing in the mirror but feel compassion for the ghost in the hall, I want bad ends and a glimmer of redemption even in the dark.  I want stomach-twisting realizations and mistakes that can’t be taken back and uncomfortable sacrifices and maybe, just maybe, success.

I’m not saying any of that will happen in my series, buuuuuut I can’t say that it won’t. 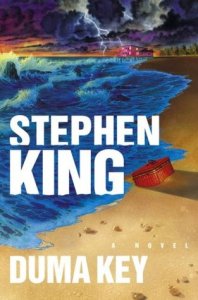 Stephen King shouldn’t even need introduction.  I’ve read most of his stuff — though I trailed off in the middle of the Dark Tower series and never got back to it, especially after I heard he did some self-insertion.  Bleh.  But then he’s always kind of written about himself, with all his crazy-writer books…  Duma Key, which is about an artist, is a step away from that navel-gazing while still allowing him to talk about the weird semi-mystical processes of creativity and the dire things that can arise from them.  Plus I love the side characters.  I…I actually named one of my cities after one of them…  Shhhhhh….

This reminds me, I need to read his alternate-history Kennedy book, and Doctor Sleep…  Also also, the 1408 movie is a great rendition of his short story, I recommend it.  That’s a great example of entirely uncontestable supernatural forces; there isn’t even an entity, just the room.

I’ve just started dipping my toe in Kendare Blake’s stuff, but she’s a new favorite and more in the Teen genre, so Anna Dressed In Blood is good if you want slightly lighter fare — though there’s still plenty of blood and terror.  Kind of a Buffy/Supernatural type tale if Buffy only had her mom around to guide her.  And was a guy.  The sequel adds a bit more flavor to the ghost-hunter profession but felt more like an extension than a proper sequel.  Or like it really did want to segue into a Buffy-type show.  Anyway, I liked it for its titular powerful-victim ghost, and I ended up enjoying the eventual sidekick-characters too.  But again, maybe just stick with this book and skip the second unless you absolutely have to know what happens after the end. 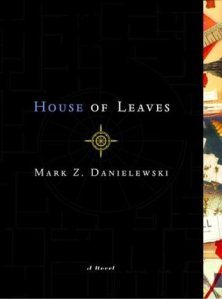 Mark Z. Danielewski’s House of Leaves…  Alas, everyone I recommend this to seems to hate it.  Maybe because it’s so much work, with its two frame stories and its ridiculous amount of annotations — some meaningless, some coded, some informational and some going on for pages and pages of their own.  And there’s the changing structure of the text, collapsing and expanding with the narrative itself…  It was first published on the web, I believe — just the core story without one or both of the frames, and then slowly snowballed into the print version of today.  I wonder what the e-book version is like, and whether Danielewski pulled any neat little tricks in it, or if the print copy is the best experience…  Anyway, it’s extremely dense, but at its core is an extradimensional-house-and-psychological-breakdown story that creeps me out even as it’s obsessively deconstructed.  Labyrinths and minotaurs…  Also, his Fifty Year Sword novel is just as experimental and fairly creepy too.

And finally, the illustrious JDatE….

John Dies at the End is by one of the Cracked writers/editors/what-have-you.  I’m not sure if I read the book because I saw it on the site or…  Hmm, no, I think I found a copy in the library shop and decided ‘hey why not, it’s cheap as dirt’, and only vaguely connected it to that guy over there on the internet.  Anyway, while it has a lot of gross-out humor and shenanigans in nearby dimensions, it also has a character twist that had me foaming at the mouth with jealousy.

Which, as a proper artist, I instantly stole.  Yoink!

All right, not wholesale, but it helped me solve this one plot-point that had been up in the air for a while due to several competing possibilities.  And if that’s not the sign of an influential work, I don’t know what is.

5 Responses to Influences: Pulse (and other Supernatural Horror)