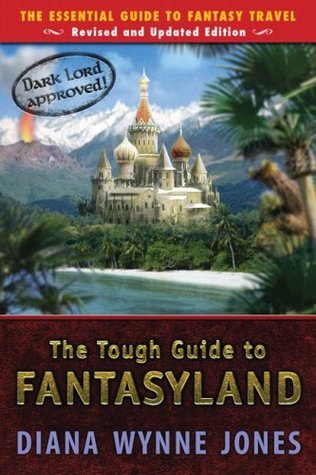 I think the only book in the FRB post for today that I’ve read is the Harry Potter series, though I do have Shadow and Bone on my list…somewhere down in the hundred-somethings, perhaps…  No reflection on the book’s perceived qualities, just the fact that my eyes are bigger than my reading-time.

However, I have plenty to say on the topic, which is ‘City of Wizards’.  As the Tough Guide defines it:

City of Wizards is usually a Good thing, since only Good Wizards seem to be able to live together.  This City will be on a hill in some place that is hidden/hard to get to and surrounded by inviting green lands tilled by non-Wizard underlings, who also perform all domestic chores.  Houses will be of stone, often white, and their shapes gracious but odd.  Perspective and distances will be a bit strange too.  If the effect of all this is rather stately, the City will be full of white-robed Mystical Masters, out of whom no one will be able to get any sense.  If the effect is more homely, the Wizards will be more like human beings and may quarrel a lot–in fact, they will seldom agree on anything.  If the place is organized as a college, do not expect anything but Wizardly bickering.

There have been Cities of Evil Wizards in the past.  Tours will occasionally come across the sites of these, reduced to glassy slag during the ultimate disagreement.

Basically, it sounds like the Good city is the one pictured on the cover above (minus the volcano).  Which brings me to the Citadels — both the current one at Valent and the old one at Darakus.

I wish I had pictures, but my lovely artist is busy enough with my characters and my covers and my horrible monsters; I don’t need to pile some landscapes on her too.  So I shall paint some word-pictures instead, I guess!  The paragraphs below are from book 2, The Splintered Eye:

A gust of cold air washed in as the door unsealed long enough to let [Geraad] through. He held his hat down with his wrist and squinted in the late light. The balcony stretched like a white bib around this level of the tower, a few patches of flowers browning in the planters between the benches. Positioned only a few yards away was a palanquin with Council-sigiled curtains, four branded construct bearers, and a hare-shaped stepstool awaiting him.

Beyond them, the Citadel at Valent stretched in all directions. Titanic walls of black obsidian ringed the wild collection of towers, artificing factories, terraced gardens, journeyman apartments and communes, initiate dormitories, casting domes, greenhouses, markets, and construct-transport depots, all draped in old harvest-festival banners or coated in whitewash and sigils. Residents and servitors moved like ants on distant walkways. Behind Geraad, the Sea Tower rose eight additional floors but did not quite surmount the rim of the great wall; below him, it descended sixteen floors to the broad mesh layer that served as the ground level. Beneath that, constructs and elementals and arcanely adapted sea-slimes did their janitorial and maintenance-work among the detritus of the city.

Usually there would be Masters’ apprentices lingering on the balcony, taking the opportunity to escape the stifling confines of their teachers’ suites and chat amongst themselves, but the weather had gone crisp recently and like migratory birds, they had sought warmer climes. Geraad’s footfalls echoed emptily on the whitewashed stone.

Already we can see a few of the Tough Guide traits here.  White stone walls, check!  Non-Wizard underlings doing chores, check!  Organized like a college and full of bickering, so much check!

Of course, none of those are the full story, or even the real story.  The walls are white(washed) basalt, but that’s because the entire Citadel-part of Valent is actually a force-erupted, hollowed-out volcano.  Due to its low-viscosity magma, it would have been a shield volcano if it had happened naturally, but the Artificers that triggered it also shaped it upward into a huge spire.  The actual city of Valent is built around the Citadel, with farmland extending into the plains around it — yes, like the Tough Guide mentions, but none of it is hidden.  It’s just sitting out there, connected to all the normal Imperial trade routes, permeable to any random traveler.

Underlings doing chores — well, that’s what apprentices are for, isn’t it?  And constructs, and elemental servitors and those sorts of things.  Why have magic if it can’t make life easier?  It’s the same reason we developed many of our technologies: to not have to waste hours on drudge work.

Granted, the mages of Valent tend to make their own tea, fold their own clothes, and that sort of thing.  You can’t really trust a flighty elemental to do that, and even the Masters and Archmages don’t have baristas in their back pockets.  The Citadel is set up like a college as much by the fact that it has a campus design as that anyone there is actually a student or teacher.

After all, much of the population is not involved in education in any manner.  The Citadel at Valent may host training for neophyte mages, but it is first and foremost the base of operations for the Silent Circle.  As the self-declared governing body for mages in the northeast (though they like to claim the whole north), their Council is not just a collection of teachers and scholars but an active political force — supposedly independent of all kingdoms and empires.

In truth, the Silent Circle and its outgrowths (the Inquisition and the Hawk’s Pride, a.k.a. the Citadel at Thynbell) are beholden to the Risen Phoenix Empire, not just for the land Valent stands on but for their continued existence after being run out of the theocracy of Jernizan.  All mentalists who are taken under the Circle’s wing, and all others who pay the tuition fee, are expected to be loyal to the Empire even though there is no pledge or contract or arcane brand to keep them in line.  The Council constantly bickers about how much they should support the armies, how many artificers they should dedicate to weapon-crafting and research, whether or not they should waive their objections to mindbending and battle-magic, and how to deal with those Circle mages who agitate against Imperial involvement.

Thus, the Citadel at Valent can’t really be said to be Good.  It tries to think of itself as neutral, but it lives in the shadow of the Imperial Palace — if not literally, then certainly politically.  The Imperial Gold Army has firm control of the Hawk’s Pride offshoot, and the Inquisition is used to condition the Empire’s soldiers and slaves against mutiny; they don’t even pretend to be independent.

The Citadel at Valent, then, is an embattled refuge for Imperial mages who don’t want to fight.  Every mage who trains in Valent is given the option of purchasing an apartment within the basalt walls, which may not be very large but will include a sanctum in which a Sanctuary spell can be set.  Calling Sanctuary will transport the mage back to Valent no matter where they were before (barring a teleport block), and once within Valent they are considered untouchable by outside authorities.  Whether they escaped a murder scene, an Imperial dungeon or the Hawk’s Pride itself, no one but the Council can punish them while they remain in Valent.

Thus, even mages who have finished their studies and found employment elsewhere (in the armies or in civil service, or traveling the world) will maintain an apartment at Valent in case the worst happens.  This anchored community means that at any moment there are a number of political refugees among the Citadel crowd, mixing with the students and teachers and working in their own laboratories, forwarding their own aims.  As long as they don’t make trouble within the city, the Council will defend their right to act according to their conscience outside of it.

In that much, I suppose they’re Good Enough.

As for a destroyed City of Wizards, one must only look back to the previous bastion of the Silent Circle: the Citadel at Darakus.  Rather more ambitious than a force-grown volcano, it was your typical flying citadel, held aloft by thirty-six anti-gravity flight cores in a mystical arrangement.  Unfortunately, any flying citadel has a down-side — straight down, as it happened.  An organized act of sabotage took out the bulk of the flight cores all at once, dropping the Citadel like a meteor onto the plains of Jernizan, where it was pulverized at the center of a two-mile-wide crater.

So yes, there is some slag-glass in the Darakus Crater, and yes, it was due to some disagreement between factions — though no one alive knows who did it.  But the Silent Circle back then was truly independent, and the flying citadel a symbol of that; they could have left their host kingdom at any time.  It’s hard to say that the Circle of the Darakus era was Evil, while the Circle of the Imperial era is Good.

There are some mage-specific cities outside of the Empire — mostly in Yezad to the south, where magic is considered commonplace and the business of Valent would be sneered at as small-scale and backwards.  In the northern kingdom of Gejara and the southern one of Padras, though, mages are well-integrated into the rest of society, with a few university campuses but no walls dividing the arcane from the mundane, and nothing so flashy as a dead volcano to live in.