Since my artist friend sketched up a few more images of my creatures, I’m sharing them here with blurbs like last time. 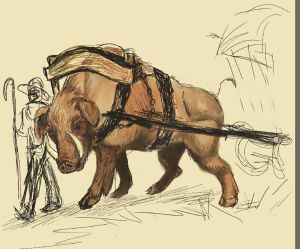 Native to the Imperial Heartlands, the draft-hog is one of several lineages descended from the great boar spirit Aherenka.  Because Aherenka was killed during the Wraith War, his descendants are no longer skinchangers; instead, they are either boar-folk who can not shift but retain intellect and culture, or wild beasts with minimal intelligence.  Draft-hogs are some of the latter, but though they are not smart, they can be quite loyal, and if well-treated are willing to defend their masters to the death.  Too slow to be commonly used as riding animals, they instead plow fields and haul caravans, though some are raised for meat and hide.  As opportunistic omnivores, they will eat almost anything given to them, but are not motivated to hunt or quite as interested in scavenging carrion as the Tasgard horse.  Still, if a draft-hog accidentally crushes you and was not fond of you, it will have no qualms about eating your corpse.

Pictured is a meat-bred draft-hog, identifiable as such by the lack of bony protrusions over the eyes and around the bases of the ears, and by the minimal hide ‘plating’ as compared to the heavy plates seen in most working draft-hogs.

Like the Tasgard horse, the Ten-Sky horse originates in the Jernizan Plainsland west of the Rift.  Unlike the Tasgard, the Ten-Sky is a lightly-built, skittish creature unsuited for wartime use.  Though they are gentle and easily tamed, they are also quick and springy and can escape in a flash–and will do so at any loud noise or abrupt movement in their vicinity.  They do have their uses, both as race-horses and courier steeds, but for the Imperial Armies’ purposes they are only good for scouts and mages–and even then, using magic in the saddle can easily spook them.  Also unlike the Tasgards, which linked themselves to the lion-spirit Athalarr when Ryntri Lakhigi died, the Ten-Skies have no spirit and are thus simply animals.

Part manta ray, part hovercraft, the raywings are the result of centuries of experimentation by the haelhene of the White Isle.  They can stretch twenty feet from wingtip to wingtip, thirty or more from mouth to tail-tip, and while most are black, some have been modified to have paler tones or even to glow.  Normally docile creatures, they have been known to use their tails as whips against aggressors but would prefer to flee confrontation.

Raywings’ main modification comes in the form of hover-vents on their undersides, through which they cycle a steady stream of air to create a cushion that keeps them aloft at low altitudes–approximately one to eight feet.  They can hover at such a height forever without being taxed, and often do so above the sea, shore, sandbars and lakes in order to hunt crabs and sea insects (and occasionally water-fowl) which they inhale somewhat like a vacuum cleaner.  They have difficulty climbing to a higher altitude though, and little control in complex weather systems; both require arcane assistance from their haelhene riders.  The haelhene tolerate this because the energy-expenditure of supporting a raywing is intermittent and much less than they would require to fly on their own, especially in the dark.

Small, innocuous and not visibly plotting your demise, the Halion cat is nevertheless a dangerous creature…because it has thumbs and knows how to use them.  Technically a type of skinchanger, it appears as a small ring-tailed feline that has faked domestication to spy upon humanity and otherwise take advantage of its generosity.  Attached to the beast-spirit Niya, the cats could change shape if they wanted to–and sometimes do assume the forms of babies, toddlers or goblins, depending on their size–but prefer to stay in cat-form, as it is obviously the best of all possible forms.  Most cat-‘owners’ are unaware that their cats are sentient, since Halion cats are generally content to laze around, eat insects and grigs and occasionally knock things off high shelves for fun.  However, they can talk–if they feel like it, and think it won’t blow their cover–and have been known to take direct little furry hands in events when they consider it necessary.  The Phoenix Empire considers them to be messengers of the Dark and has ordered its armies to eradicate them.  So far, this plan has not gone very well.