Back to posting content.  Not a ton, since I’ve started the final edit for book 2, but some details on the animals and monsters to be found on Halci.

One of the first animals to be mentioned in the novels is the grig, which is short for ‘griinagagi’ or ‘eater’.  I don’t have a picture yet, but imagine a rat-sized, heavily feathered dinosaur with a long tail, crocodilian mouth, and wing- and foot-claws.  Also referred to as a vermin-bird, it is one of Halci’s main scavengers, preferring to eat carrion or garbage rather than hunt.  Extremely opportunistic, grigs will also feed on any creature that can not run or fight back, including sleeping, unconscious or otherwise immobilized people and animals.  In addition, normally-solitary grigs flock together when winter comes and migrate south, causing havoc to anything in their path as they harry farm animals and even people to their deaths so that they can eat.

The catchall term for several types of wading- and striding-birds, the garto comes in many shapes and forms.  Most common is the dwarf garto, a red-and-black flightless landfowl standing 1′ to 1’6″ at the shoulder, with a scaly neck and head, foot-spurs, and a long sharp beak.  They are the domesticated version of the wild garto, or landstrider, which stands 5′ at the shoulder but has much the same features–though with a nastier temperament.  Both the dwarf and wild garto live mainly in the grassy Riftlands.  Related are the gerlito or sandstrider, shorter at a 4′ shoulder height with tan-and-white bodies and a desert habitat; and the kyrelo or shorestrider, a wading shore-and-swamp variant that stands 6′ at the shoulder and up to 9′ at the head, with white or grey plumage.  All can be territorial and aggressive. 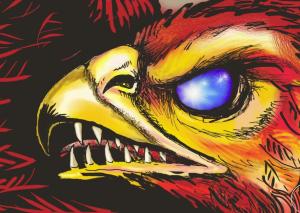 Similar to grigs in that they retain many lizardlike traits, toothbirds (which include the sawbirds, fangbirds and visebirds) are a variety of small birds-of-prey, insectivores and grazers that retain lizardlike teeth, sometimes as growths on their beaks and sometimes with full lizard jaws in place of beaks.  Sawbirds tend to use their teeth for harvesting grasses, while fangbirds and visebirds are more predatory, mostly hunting songbirds, fish, small reptiles, amphibians, insects and eels.  All are hunted in turn by the larger birds of prey. 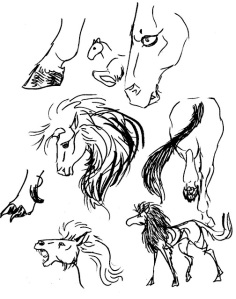 Technically a type of skinchanger, the Tasgard Horse is easily distinguished from other types of horses by its omnivore’s dentition (including prominent canine teeth), its leonine mane and tail, and its occasional possession of paws instead of hooves.  Tasgard horses are broad and stocky, with coats ranging from grey through tan to gold, and sometimes pure white.  They are the product of the horse-spirit Ryntri Lakhigi’s death, and their tribe’s subsequent adoption of the lion-spirit Athalarr as a patron.  This allowed them to persist as a skinchanging people, but forced aspects of the Lion upon them each time they changed, so that those who transformed frequently eventually became lions in body though not in blood.  Most members of the Tasgard tribe now prefer not to change, remaining in horse-form unless they have no other choice.  Some even willingly serve local human communities as war-horses–their own way of being soldiers–and are known as brave and loyal steeds, even if their riders are unaware of their sentience.

The most northern of the wolf subspecies, the quillwolf finds itself at a mortal disadvantage, for it is in the prime territory of the massive bird-of-prey known as the ghostwing.  To dissuade ghostwings from swooping down and snatching them–and also to ward off the other large predators of the northlands–the quillwolves have developed longer, sharper guard-hairs that act like a porcupine’s quills when the wolf is agitated or under assault.  These quills can be shed and are often gathered by the locals for use as decoration.  Otherwise, quillwolves are grey-white in winter and grey-brown in summer and stand around 3′ to 3’6″ at the shoulder, with a typical pack-size of 6-8 members.