D. D. Phillips is still chugging along on the cover (post inbound within a week or so, I think!) but in the interim, when she doesn’t have access to her cover files or the energy/attention to work on all those layers, she sometimes does creatures for me!

Well, this time she did some ogre tusk tests…which morphed into something more.

She’s done a bit of ogre work for me before, as seen in the sidebar, but we never got proper finished/colorized versions together.  This time though, she went researching hippos (which are the base for my ogres) and got me the tusk types below.  Alas, while tiny hippo ears are almost unbearably cute, they’re a little too hippo, and I was concerned that on the more greenish-skinned ogres they’d start to look a bit….Shrek.  So after the pic below, the ears get shifted larger and downward.

At this point, I realized that some of the tusk-styles fit best for certain ogre tribes — since I’ve mentioned before that one tribe has very protrusive ones, to the point of even their mixed-blooded human kin having visible tusks and trouble with human speech, while another type has little stub tusks that sometimes don’t even show.  So I badgered her to colorize them, and after a few steps, she came up with these:

The Ghesjek ogres, found in the black volcanic-earth areas directly north of the Khaeleokiel Mountains.

The Leshya and Naanja ogres, now collectively one tribe, in the forests and swamps of the northwestern taiga, by the Thundercloak Range. 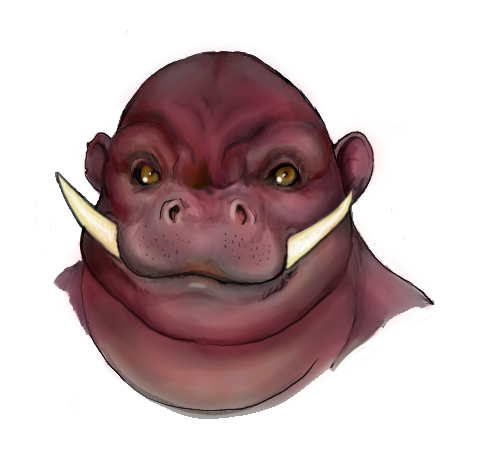 The Voryeshki ogres, of the dark red sandstone hills of the Volske-Jek Range.

(Here, have a quickly clipped map!)

Those particular wigs obviously aren’t canon, but they’re not too far off the mark!

We have plans to do more proper ogrish accessorizing once the Book 4 cover is live.