Time again for the year-end wrap-up.  As always, the books I highlight weren’t necessarily published in 2015, because I don’t make any great effort to read new books; I have an endless backlog, so I get to things when I can.  In fact, I got to some old books this year and realized I should have read them 10-20 years ago, when they were new!

The Foreigner Series, by C.J. Cherryh.

The first of these alien-world-diplomacy novels came out in 1994, when I was not at all interested in sci-fi, but I still feel like I would have enjoyed them as much back then as I did now.  And the 16th book in the series, Tracker, did come out this year, so technically I can list it as new!  But anyway, I started the first book on January 11th and finished the 16th on September 14th, so this series was 3/4ths of my year in novels.

Which makes it a pretty good year, honestly.  While there are always hiccups in a long series, Cherryh sections off her extended story into trilogies, with the first one setting up the major crisis of the moment, the second delving into political (or military) complications, and the third working to wrap up that arc while allowing our hero, Bren Cameron, to look forward to more assassinations, entanglements, and alien child birthday parties in the future.  This permits more character- and plot-development than in one-shot series books, which is important because none of the problems ever truly go away.  Bren can’t solve (many) things by shooting someone; his great adversaries are the intractability and fractiousness of human (and atevi alien) nature, and his talent is to bring them together, even if for only a brief truce.

This does make for a lot of ‘middle books’ where ground is covered but nothing of great note happens.  However, there are always spots of great characterization or cleverness or tense negotiation with new threats/potential allies, and it’s one of the few series that have ever pulled me back to old books to revisit my favorite bits.  Normally I don’t reread anything! 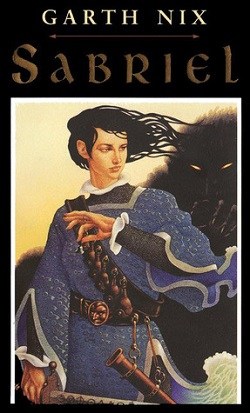 The Abhorsen series, by Garth Nix.

This one, I should have read ten years ago (even though it was published in 1995), because my friend Ali bought me the entire (at that time) trilogy one Christmas and I just…never got around to it.  Sorry, Ali!  I’ve amended that now!  From October to …uh, the end of October, I read Sabriel, Lirael, Abhorsen, and Clariel — the fourth published only last year, making this once again almost recent!  And though the land outside the Old Kingdom was gratingly posh-British, I quite enjoyed them.

However, I think it’s probably best that I read them now instead of back then.  They’re about a family of necromancers (related to another family of seers) who use bells and Charter magic — a sort of ultra-controlled form of the otherwise dangerous Free magic — to put down the undead and other Free magic monsters and demented spellcasters who plague the Old Kingdom.  There’s a sort of dimensional intersection between their land and a WW2-era-ish other world, where the effect of magic peters out the further you go — but not quickly enough, so that the ‘modern’ people near the border are threatened by Free magic they can neither understand nor harness.  The Abhorsen is the primary good-guy necromancer who deals with these problems, and….let’s just say that I have a fascination with necromancers and am glad that I read these -after- I solidified my own ideas, instead of before.

I didn’t read much Juvenile or Young Adult material this year (though Clariel was listed as YA in our catalog, so ehhh, borderline there).  I enjoyed this one, though, because it’s a reverse portal fantasy; instead of a kid from the real world tumbling into a fantasy realm, it’s the story of a boy and a girl and a horse getting punted from their fantasy realm and stuck on modern Earth — and discovering that the same has happened to many notorious villains from their homeland’s past.  Worse than that, the notorious villains have now become…..TEACHERS.

It’s an interesting little story.  The protagonist, Caden, wants to become a mighty paladin like his brothers, and lives by a certain code of honor — even when he gets chucked into a foster home with a disbelieving foster brother, stuck in a school full of evil teachers and helmed by a possible dragon, and constantly watched by his foster mother and the local cops who are trying to track down his clever horse and keep him from solving any of his problems.  Is he stuck in North Carolina forever, with no one but his smart-ass spellcasting acquaintance Brynne in the know? 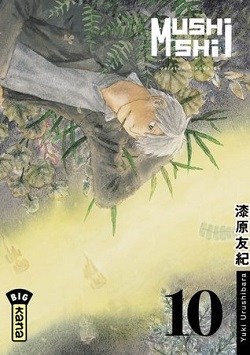 This series is not at all new.  It ran from 1999-2008, and I watched what there was of the anime probably ten years ago, but I never got around to reading the manga until now.  And that’s a shame.  This series is a real work of art — not so much in the first few volumes, where the mangaka is still figuring out how to do good faces, but in the backgrounds and the creatures and the stories themselves.  By the third volume, the little art hiccups were all hammered out, and the stories became five-stars for me across the board.

The central conceit is that the world is full of tiny creatures called mushi — sort of mindless spirits spawned from the river of life, that live in their little ecological niches but can have dire effects on humans if disturbed.  Ginko, the protagonist, is a traveling mushishi who works a combination of shamanism and medicine to deal with mushi-caused afflictions and mushi/human conflicts.  There are several stories per volume, and they tend to be low-key and contemplative, in gorgeous rural or forested locales.  They remind me of fairytales in the old cautionary-story style, warning about wandering in the woods, following mysterious lights, chopping down certain trees or taking certain shells from the riverbank — except animistic, without the fairy-court trappings you get in most of those stories.  Just little creatures trying to exist, intersecting with humans who can’t resist touching or taking or peeking at that mysterious, unusual thing. 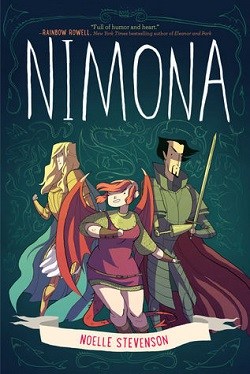 Finally, actually published this year (yay!) is this compiled version of the webcomic I’d been reading since near its start.  Noelle Stevenson has done a lot of comic book art and writing just recently, but this is my favorite, as it follows a frustrated would-be villain (Lord Ballister Blackheart) and his shapeshifting sidekick Nimona as they try to expose the so-called good guys as the frauds they are!  Unfortunately, Ballister isn’t as cut out for villainy as he’d like to be, and Nimona might be a little too fierce, and wild, and vicious…

I’ve always liked noble villains, so that’s what drew me into the story first, but then came the devious plots and magical experimentation and knightly bonding and — well, and I follow her on tumblr so there’s some AU stuff that’s cute and — anyway!  I like it.  It’s good.

Short list this year, mostly because 90% of the books I read were parts of continuing series.  But that’s all right.  I wouldn’t be a fantasy/scifi reader if I didn’t love to dive into large, complex and neverending alternate worlds, whether they be full of clannish aliens or dreadful magics.  It’s also nice to see that some series can keep going strong after decades, since that’s what I fervently hope to have for myself some day.

Worldbuilder. Self-published writer.
View all posts by H. Anthe Davis →
This entry was posted in Review and tagged review. Bookmark the permalink.