One of the things I built for my writing world was its own variant tarot deck.  Very, very variant.  Because my world has a love of the number six, the deck has six suits instead of four — corresponding to the six elements of Air, Water, Earth, Fire, Wood and Metal — and a total of ninety cards, each suit being 1-10 plus Herald, Knight, Queen, King and Crown.  Some of the cards are analogs to the standard Major and Minor Arcana of a traditional tarot deck, but I chucked a bunch and had to make up a lot more … so I decided to tell stories within the suits.

I plan to share those stories eventually, but at the moment I only have a few cards that look decent.  My artist Deb and I intend illustrate the full deck to a level nearly on par with the covers (which, as you might have noticed, are tarot cards themselves — though the pictures aren’t from the standard Halion deck) but she’s been busy on the Book 3 cover and I’ve been lax in translating my ideas to mock-up images.

So I did a few mock-ups today, to share!

Deb has me do this because for all my writing practice, I seem to have a hard time telling her what I want with words.  It also pushes me past some of my initial delusions regarding any picture I want drawn — because sometimes what you see in your mind just can’t translate onto a page. 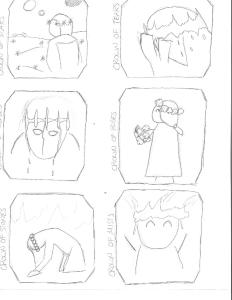 The following cards are the Crowns: highest card in each of their respective suits.  My first versions were these scrubby pencil attempts, which … looking again I suppose aren’t so bad, because I have much better control over pencils than I have over the stinkin’ mouse.  They get the idea across enough for me to remember what I was going for, anyway.

But obviously they have no colors, which is another thing Deb and I dicker about a lot.  Each suit will probably have a slightly different color scheme, so I’ve tried to suss that out as I work on the mock-up cards.  No doubt this will all change dramatically once Deb gets started, but I feel good about having gotten something design-related done today.  😀 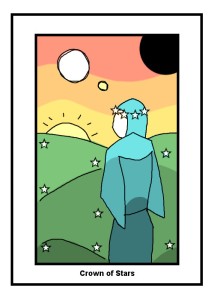 Going from the top left is the Crown of Stars, top of the Suit of Candles which corresponds to the element of Fire.  Roughly, the story of Candles follows the personification of the Sun as he kindles the stars, gives life to the Mother Moon and has the Child Moon with her.  The Child Moon is then stolen by the jealous Night, who throws down the stars as well, wanting there to be nothing in the sky to distract the Sun from her.  In the end, the Sun chases Night away, but many of the stars are left stranded on the world and forced to live as people.  That makes this suit part cosmological creation-myth and part historical in regards to the wraiths — who fell from the sky and got stuck on this world. 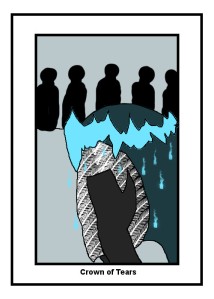 Top right is the Crown of Tears, top of the Suit of Cups which corresponds to the element of Water.  Cups follows an ill-fated romance between two tempestuous lovers as they fight, cheat, cling, scorn each other, seek solace and fortune behind each other’s backs, yet refuse to let each other go.  In the end, one partner chooses to poison the other, and mourns under veil while watched by suspicious crowds.  It’s not a nice story, and reflects the main continent’s general view of water: placid on the surface but potentially disastrous once you’ve waded in.  You won’t find many bold navigators among the mainlanders here — or many swimmers, really.  This suit also holds one of the relatively few deity cards, the Goddess of Death, at the King of Cups position

Middle left is the Crown of Blades, top of the Suit of Swords which corresponds to the element of Metal.  Swords is largely about the betrayal and murder of the God of Law and all of his knights, with an initial period of training and revelry devolving into assassination and open warfare.  However, there is an undercurrent of resistance-to-evil and loyalty-despite-treachery … not that it ends up doing anyone any good.  Like Cups, Swords is one of those suits you don’t want to see drawn in your reading.  The Crown of Blades itself depicts an apocryphal survivor of the massacre of the Knights of Law; while none were ever proven to survive their god’s destruction, many people want to believe they did. 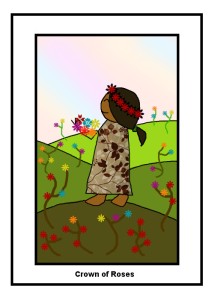 Middle right is the Crown of Roses, top of the Suit of Staves which corresponds to the element of Wood.  The suit’s tale focuses on the vagaries and delusions that complicate human desire, versus the relative straightforwardness of nature, and follows a young man as he tries to pursue an unrequited love — who happens to be a noblewoman.  Captured, jailed, then freed by vines and animals, the young man finally realizes that his beloved doesn’t want him and runs off into the woods with soldiers on his heels.  In the woods, he is guided and then transformed by nature spirits, with the culmination being his happy inheritor, who wears the Crown of Roses.

Bottom left is the Crown of Stones, top of the Suit of Gems which corresponds to the element of Earth.  Gems is all about greed and lust for power, which tears apart a couple as one of them is lured away by promises of riches.  The other attempts to win their lover back with pleas, then gambling, then outright theft, but is caught and hanged, while the lover is overcome by avarice to the point of making pacts with dark entities to gain more power.  Regret inevitably strikes when the surviving one learns of the other’s demise, but no amount of power can bring back the dead.  The suit can be done with a man or a woman in either role, but since this is probably going to be an Imperial deck and the Empire is quite misogynist, it’s a woman in the power-hungry role.  This suit also has the God of Shadows in the King of Gems spot, as that pact-making dark entity, which shows what the Empire thinks of him too.

Last, bottom right, is the Crown of Mists, top of the Suit of Clouds which corresponds to the element of Air.  Clouds follows a small community through a weather-related disaster, with the early cards showing idyllic farm life which is then torn apart by storm-winds and lightning.  This suit includes my variant of the traditional Tower card, and ends as the storm does, with the villagers banding together to rebuild.  Fair weather follows the destruction, and with it the rainbows of the Crown of Mists.  (If only I could draw a kid’s face and not have it be horrifying.  And don’t even look at the hands, okay?)  The God of Light shows up here in the King of Clouds position, but interestingly he’s not doing anything, just observing the storm-wracked landscape.

I’ll probably make a separate page for the tarot stuff as I sketch out more of it.  Just so you know, the Book 1 cover card is meant to be the image on the back of the deck; originally I wanted it to be a book-related variant of the Herald of Cups, aka the Lovers, but wasn’t happy with the first version.  Some day I want to swap it in.  Book 2’s cover is a variant of the Wildwoods, aka the Queen of Staves; Book 3’s cover will be a variant of the King of Swords.

3 Responses to The Halion Tarot #1: Crowns