My last post was all about the pseudoscience of shapeshifting in the world of the War of Memory series.  I remembered shortly afterward, though, that another important talent is closely linked with the skinchanging gene — or rather, with having a deactive one.  That talent is mentalism.

What I refer to as mentalism is what would normally just be called telepathy.  While other fictional worlds — and, some would argue, the real world — have a broader span of psychic powers like telekinesis, clairvoyance or even possession, Halion mentalists (or Psychers, when used as a title) only have the ability to read minds and delve through memories.

Not that this is a small ability.  Mentalist societies predate the Silent Circle and the other formal mage organizations by far; in fact, many were established long before the wraiths began teaching humanity magic.  They have also been key in the preservation of knowledge during harsh regimes and widespread upheavals, for in addition to being able to probe others’ memories, mentalists don’t forget.  While they are trained to taper off the prominence of less-recent memories, they still on a subconscious level retain everything they have seen and heard since the initial triggering of their power — and can do so perfectly.  Even others’ memories that they have examined remain indelibly in their own.

This, of course, can be a hindrance as much as a boon — thus the need for training as early as possible.  The first mentalists were usually considered touched by the spirits and were apprenticed to the shamans of their tribes, though others struggled with their abilities and went mad or removed themselves completely from other people.  When the tribal systems began to break down, the first mentalist societies were formed to act more as support groups than as governing bodies, though eventually they became both.

There were many theories on the origin of mentalism back in those days, from ‘touched by the spirits’ to ‘cursed’ to ‘tampered with by wraiths’.  It was not until the advent of medical magic that the linchpin of mentalism was found to be a genetic marker related to the deactivation of the skinchanger gene.

You see, mentalism only occurs in humans.  While it can be used on others — specifically skinchangers and beast-folk, but not wraiths as they do not technically have ‘minds’ — it is caused by a genetic mutation only found in mixes of certain beast lineages, and can not exist in a pure skinchanger bloodline.  All of the lineages noted as having a high probability of this mutation are either herd- or pack-living beasts, thus giving rise to a theory:

The mentalism mutation was the skinchanging gene’s last gasp at keeping its herd-members and pack-members connected to each other despite their disconnection from their parent spirits.

After all, every skinchanger is connected to its parent spirit by its very essence, through which instinct and information can be shared as gut-level impulses — a sort of background hive-mind.  Herd- and pack-spirits have always been closer to their mortal children than the more solitary types; they manifest among their children more often, lend more power, and are overall more involved to the point that some prefer to walk among their children in the physical realm rather than stay safe in the spirit realm.  This constant, persistent connection between mortal skinchanger and parent spirit, and between members of a mortal herd or pack, left markers within the genetic makeup of those lineages that attempted to reconnect with their fellows even after the connection was severed by the deactivation of the skinchanging gene.

The potential for mentalism, therefore, is the genetic echo of the primordial spirit connection.

In the earliest days of humanity, mentalists who awakened to their powers were limited to using them on their lineage-based kin; the mentalism mutation only stretched far enough to link like with like.  Humans with wolf-blood could mindspeak to other wolf-bloods and to wolf skinchangers, but not to those without any wolf-blood — even if those others were mentalists themselves.

As time went on and the human bloodline became more and more mixed, though, the mentalism mutation strengthened.  Different lineages’ genetic access braided together to create mentalists who could connect with all other mentalists, and who could increasingly delve into the minds of those with inactive mutations — or no mutation at all.  Previously it had been impossible to read or control an individual who bore none of the herd/pack mentalist markers; now, it remains difficult, but that trait no longer confers immunity.

There does seem to be a ceiling for mentalist lineages, though.  After a certain threshold of intermixing, no additional reach or power is gained, and further strength can only be trained, not bred.  Having two mentalist parents is also not a guarantee of having a mentalist child, though it is a predictor.  Also, while the mentalist markers can be forced into activity, this does not usually bring pleasant results; mentalism is tied to the human soul as strongly as it is to the mind, and as most mentalists these days do not have training in shamanism or necromancy, they act half-blindly when they try to trigger a mentalist awakening.

I should mention that while most mentalists awaken during adolescence, it can happen at any time from birth to mid-twenties.

Aaaand now some maps and statistics! 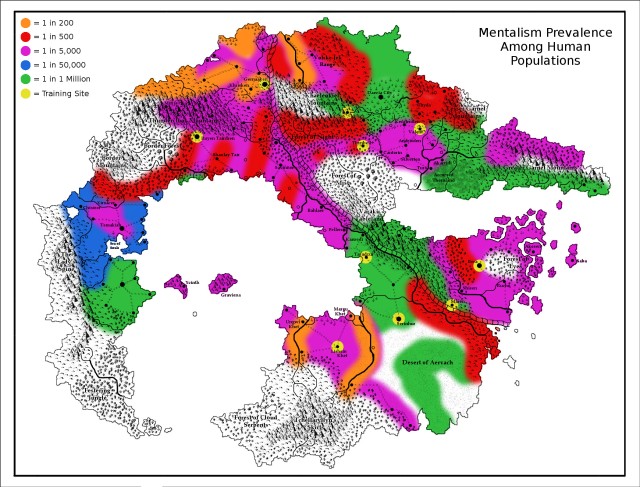 This map is a very rough estimate of mentalist prevalence in the known world, based on population distribution of the various beast lineages.  As mentioned, mentalism is overwhelmingly a product of herd- and pack- (and flock-) related lineages: Deer, Wolf, Horse, Lion, Crow, Bull, Boar, et cetera.

Even more important, though, is whether the parent spirit of the lineage is alive or dead.  Medical mage research suggests that the mentalist markers are still being pulled-on by the essence of their parent spirit, in addition to the psychic magnetism between members of the mortal kin-group.  Thus, those spirits still extant exert a much greater pull than those that have been killed or shattered, and thereby cause a greater prevalence of mentalism within their lineage.

The only living herd prey-spirit is Oega, parent of the ogres.  As full ogres are skinchangers, they do not possess mentalism; however, their ogreblooded human children do, at a prevalence of 1 mentalist per 200 ogrebloods — shown on the map in orange.

The living pack predator-spirits (and scavengers) are Raun the Wolf, Athalarr the Lion and Zolvin T’okiel the Crow, among others.  Mentalism is less prevalent among predators than among prey because of a greater emphasis on individualism within a pack structure as compared to within a herd.  Due to this, the mentalist markers have a slightly diminished pull, only awakening one mentalist per 500 members of these lineages.  They are shown on the map in red.

The dead herd prey-spirits are Tan the Stag, Ryntri Lakhigi the Horse and Szarnos the Bull, among others.  These three lineages are spread heavily throughout the known world, and it is thought to be the sheer weight of their numbers that pulls one in every 5,000 of their kin into the mentalist awakening.  They are shown in purple.

The single dead pack-predator spirit on this map is Kishirror the Hyena.  His old territory, marked in blue, doesn’t actually have many humans; his skinchanger children nearly eradicated their human kin after his murder and their subsequent embrace of the Death Goddess, and have been fighting with their skinchanger neighbors for too long to have any interest in the diplomatic human Mask.  Still, a population of slave and feral humans exists in that area, but not enough for the one-in-fifty-thousand chance of mentalism to crop up very often.

Finally, the green areas show all the lands dominated by solitary lineages, whether predator or prey.  Erro the Bear, Senket the Eagle, Shaskret the Owl, Kuumgara the Lizard, Niya the Cat, Rikshanva the Toad, and many others either do not involve themselves enough with the physical world or do not reinforce enough of a connection between their children to create a mentalist marker.  While a spontaneous mutation can occur, it is truly a one-in-a-million chance — and these areas do not have many millions.

I did some calculations based on these distributions and came up with a rough estimate of 60k active mentalists on the entire continent.  Not all mentalists awaken with the same potential, though; 80% are so limited that they are considered ‘untrainable’, either because they can not send out their thoughts or can not hear those of others.  These are taught to control their own minds and then returned to their communities, where they often serve in knowledge-based or governmental capacities.

The other 20% — or about 12k — are unevenly distributed because of genetic prevalence, with about 1/3rd in Gejara and Jernizan (northern ogreblood kingdom and western plains kingdom), 1/4th in Zhang (southern kingdom), 1/4th in the Phoenix Empire, and the remainder sprinkled around Ciritheen (southeastern kingdom) and the far west.  The Phoenix Empire’s total calculated mentalists are 2823, with almost half of them in the Inquisition, 673 working or studying with the Silent Circle, and the rest in the Gold or Sapphire armies or in civil service.

2 Responses to The Psycher Gene