I previously posted my attempt at making flags for my Imperial protectorates, some of which worked, some of which didn’t.  I can’t say that my skills with the GIMP2 program have particularly improved, but I do have a few more maps for today — most of which are rather more complex than the protectorates’.

First, I’ll pin up the protectorate I missed last time: Kerrindryr.  As the second-youngest Imperial protectorate (after Illane, which was just reconquered a year ago in 170 IR), it has only spent eleven years as a part of the Risen Phoenix Empire but has been allied with it for nearly a century.  Or rather, the Low Country area of Kerrindryr has been allied with the Empire; the High Country dwellers never trusted the Imperials and still resist their incursions.  The flag below is the original flag, which was used until the Imperial annexation. 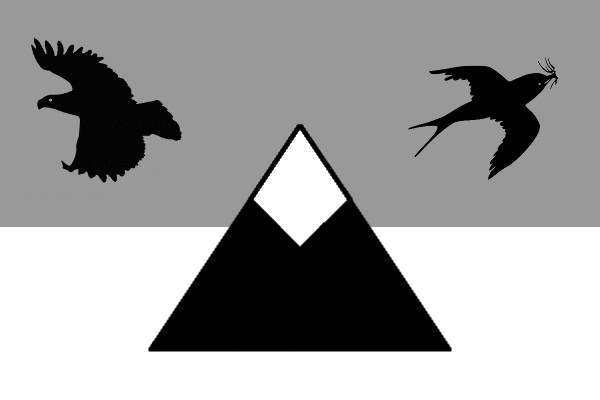 Post-annexation, the Low Country adopted an Imperialized flag — which some see as highlighting Kerrindryr’s role as a major resource-supplier to the Empire (mostly stone, metal and timber) but others see as a banner of glorified servitude:

Meanwhile, the High Country adopted its own variation with an emphasis on resistance toward both the Empire and Jernizan, as well as their alliance with the Muriae (Silver Folk):

The bird on the left is Senket the Sky Ruler, the spirit of eagles, who is said to have flown over Kerrindryr’s Thundercloak Mountains in an attempt to attack a wraith outpost with a weapon wrought of living silver.  Senket supposedly couldn’t fly high enough with the burden and ended up cutting troughs into the mountains and eventually dropping the sword onto the crest of the tallest peak, thus accidentally establishing the Silver city of Muria. 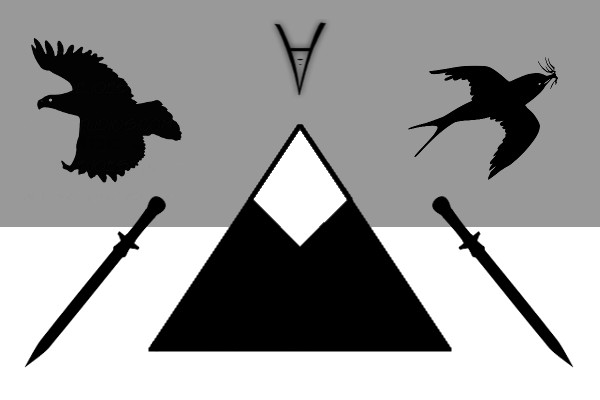 (This is a popular folktale; Muria was established long before the Descent of the Wraiths.)

The bird on the right is Hythrak the Heart’s Voice, the spirit of songbirds, usually seen as a blackbird.  Hythrak once called the Thundercloak Mountains and related valleys and lowlands its home, but was killed by the wraith-captain Ylwain after becoming too curious about the wraith spire to the north of the mountains.  (This part is true, and did incite Senket against the wraiths, just not with a massive mountain-cutting sword.)

Moving on to the non-Imperials:

Jernizan used to be the Empire of Altaera, ruled by the God of Law, but time has taken a toll on it.  First came the Gods’ Pact which banned the deities from open intervention in the world, thus necessitating a mortal emperor rather than Law himself; then came the Great War of Empires and the Sealing Disasters, which ruined Altaera’s southern lands and sank many of its great cities.  With Law’s distance came governmental abuses and new religious influences — specifically the worship of the Lion spirit Athalarr — and by the time of the War of the Lion and Eagle, Athalarr had basically replaced Law as Altaera’s patron.

Unfortunately, Altaera’s Pyrrhic victory in that war caused its government to collapse.  It lost much of its territory to its neighbors and almost tore itself apart with civil war, but eventually stabilized under the new name of Jernizan.  The God of Law’s death two centuries ago had a discomfiting effect on it, but Athalarr’s faith had already built to the point that the Lion spirit had become a god in his own right, and so he filled the gaps that Law had left.

I mention all of this because the flag honors both its former deity and its current, and purports to follow both their philosophies, even though Jernizan has long since abandoned the real tenets of the God of Law:

I know this one is quite simple — probably too simple for a land with that much religious backstory, plus I don’t know how to bend the text to make it look nice on the scroll — but I might add some embellishment later, or just decide that Altaera’s reformation as Jernizan came with some asceticism in design.  If I do the old empires’ flags, they will be ornate as hell.

Technically, Corvia doesn’t have a flag.  It didn’t come into existence until after the Empire of Altaera invaded and destroyed its people’s previous homeland and then collapsed back upon itself, leaving Altaeran settlers in those old lands and the people who would become Corvish displaced into the woods.  Despite constant raids upon the Altaeran settlers (who would become the Wynds), the displaced Corvish never managed to win back their own territory and so set up rough clanholds within the mountains and forests north of their former homeland.

Though these clans are mostly allied, they are not a cohesive whole and there is no territory-wide government — thus no official flag.  However, if they made one, it would probably be a trollish flag like the one above, depicting a fox (Daxfora the Slinker) pouncing upon the symbol of the Imperial Light (as the Risen Phoenix Empire now owns Wyndon and persecutes the Corvish).  Outside are two circles of crows representing the myriad crow-folk and the spirit Zolvin T’okiel, who with Daxfora is the patron of these displaced people.

Probably my favorite flag so far.

Moving north, we have the Republic of Gejara and the Allied Clans of Krovichanka, both of which have large ogrish and ogre-blooded populations and are considered enemies of the Phoenix Empire.  There is currently a truce between Gejara and the Empire — as Gejara is one of the three arcane centers of the world and probably exceeds the Empire in magical firepower — but as Krovichanka directly abuts the northern border of the Imperial Heartlands, it and the Empire are very much at war. 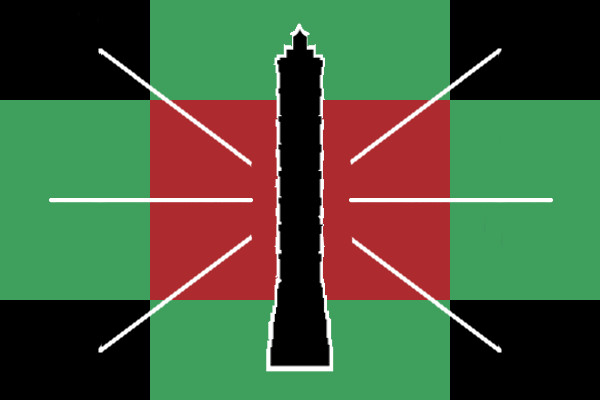 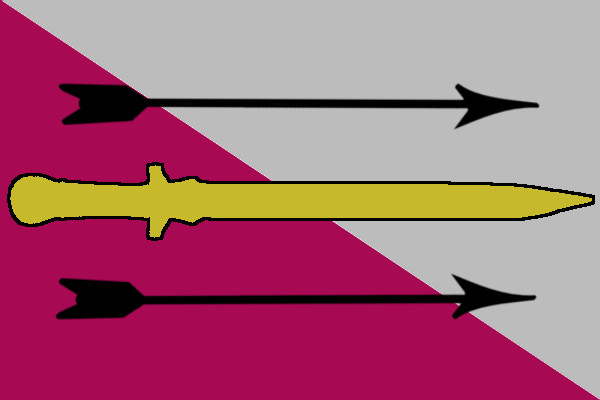 Dividing line, hostility, you get the picture.

Don’t really want to say too much about either land because we have yet to see them in the text — which means things are subject to adjustment.  Shh, ignore these ‘under construction’ signs.

Now for another place that doesn’t have a flag, but if it did, it might look like this: the Accursed Thornland of Haaraka!

I’m a bit undecided on this one.  Thorns, eyeball, roses, lots of red…  All the elements are there, but I’m not sure I like it, so I’ll probably tinker with it later.  The reason Haaraka has no flag is that, like Corvia, it has no leader; there are regional governments within the territory, and the populace accepts that they are one cohesive unit, but since they’re barricaded against the world, they don’t feel the need to display a uniform front.  Heck, they tend not to interact with the outside world at all.  Technically you could say that the eye belongs to their leader, Tirindai, but as Tirindai is asleep beneath the thorns and no one wants to wake it…

Finally, a few flags for the Riddish clans.  We saw Riddian’s flag in the previous flag-post, but as the Riddish adhere to their families more than they adhere to their kingdom or Empire, I thought I’d make up a few of their banners.  As seen below, they all include the Riddish flag as a header, but then have a smaller clan banner below; this is how they would march if they went off to war against another kingdom.  When they fight each other, they just use the clan banner, like a pennant. 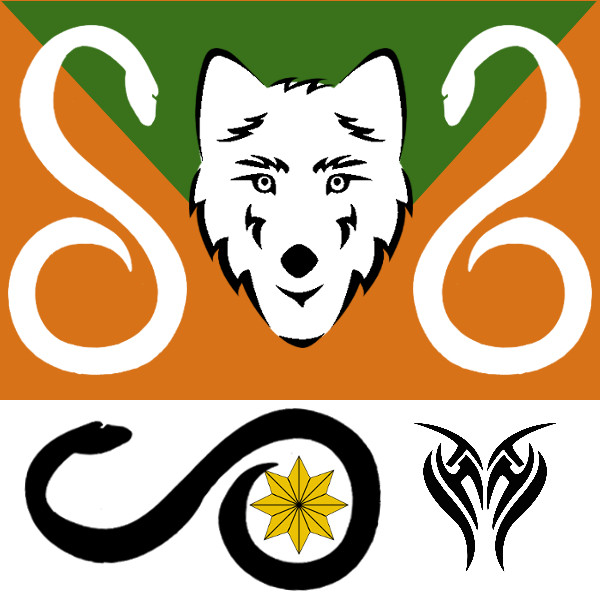 Above is te’Verdian, the birth-clan of the current Empress, Mithara.  It was different prior to Mithara’s crowning as Empress, but after that, the clan changed it to incorporate the Imperial Light symbol so they could lord their clan-daughter’s status over their rivals.  (Also, that thing on the right is a generic symbol from a brushes pack — I’ll replace it eventually with a Gheshvan symbol.)

This is te’Navrin, birth-clan of the character Dasira who accompanies Cob in book 2.  They have a bad reputation. 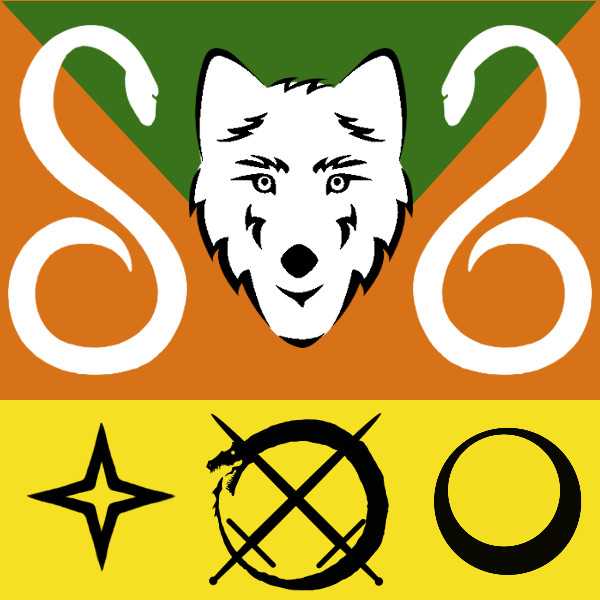 So anyway.  Getting a little better at this, which I think comes as much from selecting better clipart as from actually knowing what I’m doing.  And like with all this rough-work, it’s subject to change.  Speaking of which, I’ve altered the Gheshvan alphabet again…

But that’s for another time.