Fellow blogger Buffy was just squeeing over how much she likes flags, so I started thinking about my territories’ flags…  I’ve always had some notes on them, but only ever made one of them while I was playing as it in NationStates.

So, since the weekend is my brainless time, I decided to take a hack at a few flags.

First is the flag I made back in the day for my Averogne kingdom in NationStates.  It’s tiny because all you got was a little icon:

I wanted to remake it larger, but unfortunately I’ve either lost some skill over the years or I just don’t really know what I’m doing.  The large-size remake turned out like this:

Or, rather, I couldn’t find a clipart spear I liked so I just said ‘pike it’ and used that one.

So ehh….not a good effort.  Averogne is an Imperial protectorate that doesn’t show up much anyway…  I don’t remember if that was actually supposed to be black or if it was supposed to be dark blue, and I don’t think the symbology is pertinent anymore, so it will probably be redone once I’ve had a chance to think about it.  But still!  My first shot!

Okay, so that’s supposed to be a sheaf of grain surrounded by crenelations.  I probably shouldn’t have tried to color the outline yellow, but I hadn’t yet figured out how to do what I wanted.  Will get back to this.  Also, my ability to draw a straight line is limited.

Anyway, that flag is for Amandon, the bread-basket of the Imperial Heartlands — and also the wine-bottle.  My empire doesn’t have any particular attachment to the color purple so it’s not considered the royal shade; anyone can use it if they can afford it, which also isn’t so difficult here.

Illane is the most recent protectorate, though it doesn’t feel very protected; it’s currently occupied and where half of the action in the first book takes place.  It’s also only nominally a cohesive land, because in truth it’s a loose collection of city-states that don’t bother with each other much except for trade.  This is the accepted symbol for the lot of them, though each city-state has its own personal flag — scythe for the farmland, fruit-bearing branches for the orchards.

And much better-looking, I must say.

After that, I made Wyndon: 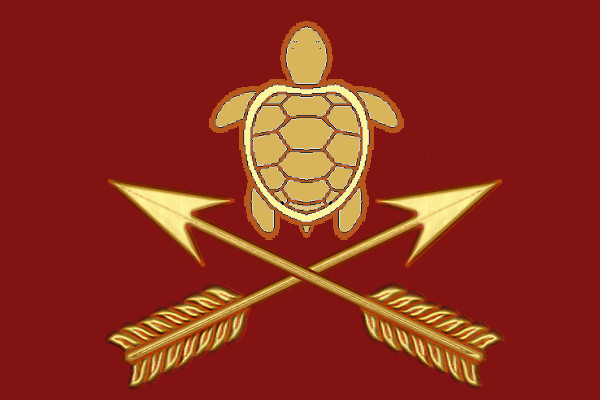 I don’t remember why part of their symbology is the tortoise.  I really don’t.  It was there in older drafts, and though the mention of it got lost due to some cut scenes, I know it was there.  So I gave it a tortoise, dangit!  The arrows are a bit more self-explanatory.  Wyndon is where the other half of the action takes place in Book 1, and is a forested protectorate at constant war with the territory to the north, Corvia.  They shoot each other a lot.

I will probably remake this one without the tortoise.  Maybe with an axe instead.  Wynds like axes. 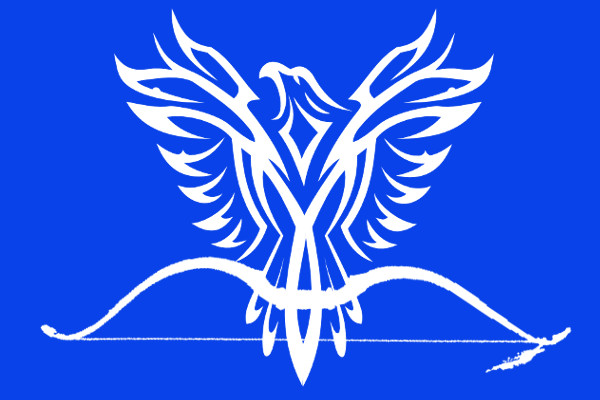 This one was a no-brainer.  The Trivesteans are of the old Eagle tribe, and even though they no longer acknowledge the Eagle spirit due to their conversion to the Imperial Light, they still retain the eagle in their flag.  Also a no-brainer was the bow.  Every Trivestean is an archer to some degree; it’s a national requirement.

Snake-folk and wolf-folk, and constant thorns in the Trivesteans’ sides.  Though they belong to the same Empire and even the same army (the Sapphire Eye), the two protectorates hate each other and have had a long, long history of conflict — even during this Imperial age.

Then comes the Daecian flag: 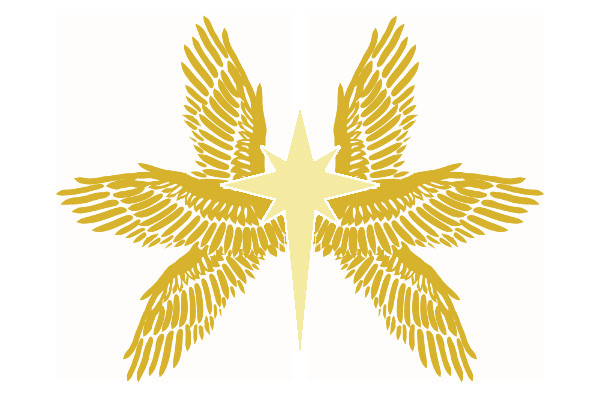 Difficult to see well, but that’s much of the point of the Imperial City.

Though this is the flag of the central protectorate and the Imperial City itself, it’s not the flag of the Empire.  I’ll have to do that one up separately, because the Imperial flag is the Risen Phoenix in blue, red and gold — like the armies, Sapphire Eye, Golden Wing and Crimson Claw.

This is, however, the symbol of the Imperial Light: the winged star.

Finally, I decided to round off the Heartlands tour with the last protectorate, Darronwy: 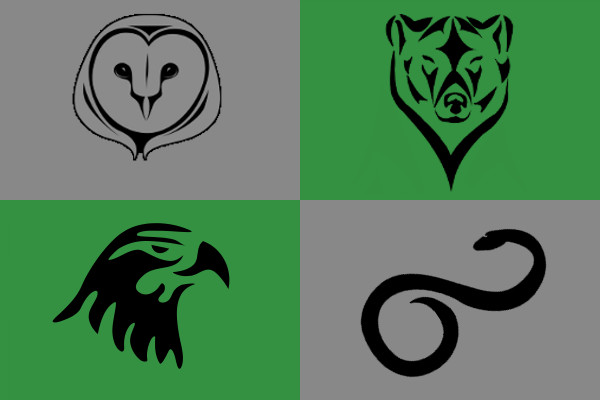 The Darronwayn also cling to their old tribal ways, with memories of the Owl, Bear, Hawk and Snake tribes living on in their flag — even though they are no longer allowed to worship those spirits.

These were all roughed up over the course of a few hours, so are works-in-progress, with the clipart sourced kind of haphazardly.  But at least they’ve given me a starting point.  I think I want to work up more Imperialized versions of some of them, since that is the era we’re currently in.  Darronwy’s flag in particular has probably been replaced by something more Imperial in all but the most remote mountain bastions.