In my previous post, I talked a bit about how I’m jealous of other people’s fancy maps.  As you probably know by now, I have lots and lots of my own maps, but the one I was specifically jealous about was a crazy-detailed map of an imaginary island nation.  I said something about wanting to make maps of my own cities–specifically Bahlaer–but not yet having anything solid.

Since I’m not one to talk about a project and then not follow it up, here’s what I’ve developed in the week since.

I started off with some really rough sketches on standard printer paper that I won’t bother scanning, because they’re basically a kidney-shaped outline with a river through it and a ‘Shadowland here?’ notation, plus an equally rough attempt at the city that came before Bahlaer, Ghezidun.  Wasn’t satisfied with what I had, so I shelved those for a day or so and just mulled the situation over in the back of my head while doing other things (like my day job, which is good for that).

What I realized shortly was that I already had a lot of information I could be using for the base details, like topography and rivers and such.  I have both the Before and After Seals world maps, which show me which way the rivers are flowing.  I have my Halion Chronology spreadsheet, which doesn’t have a ton of details yet but tells me when Ghezidun was founded, when it burned down, when the Seal happened, when the cities in its vicinity were being rebuilt, and when Bahlaer itself became an independent city-state.  To that, I decided to add a period before the Sealing/during the Godswars when the Bahlaer area was a fortress (as part of the Lady of Knowledge’s empire), and had a castle — which was right on the border with Rule of Law’s territory and thus was periodically wrecked.

So, because I already had a sketch of the shape I wanted Ghezidun to be, I started with that.  I knew that a lake had to be involved, because Ghezidun was an ogrish city, so I built an appropriate topology under it, taking into consideration the older maps. 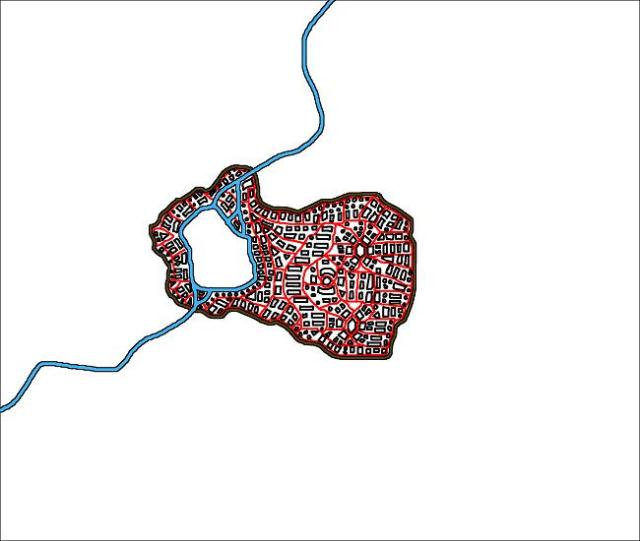 I decided to just detail the stone-foundation buildings inside the walls, because they are the ones that matter for Bahlaer; the wood-frame buildings on the outside would have all burned when the city did, and left very little archaeological imprint.

These buildings are not to scale, they were mostly just so I could figure out the roads.

With Ghezidun there, I moved on to Fort Bahlaer, which would be built more than two thousand years after Ghezidun burned: 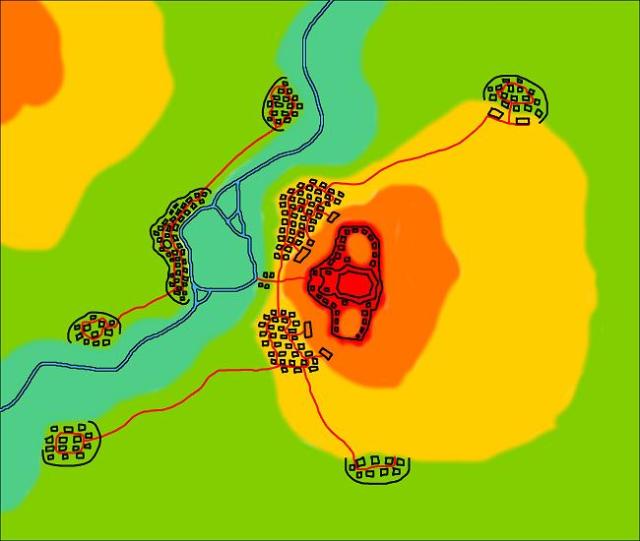 This is early on in the fortress’s life, I think.  I sketched in some satellite towns, some of which are built on the bones of Ghezidun and some of which add their own bones to the scene, to be built on later.  I’m sure there were more satellite towns and with much greater coverage of the hills and downlands, but as they’re on a border that became a serious conflict-area, many of them have been erased due to the regular cycle of conquering and razing.

The Sealing happened about 700 years after the founding of Fort Bahlaer, and the disasters that followed tilted the topology somewhat, changing the flow of the river and causing several of the caverns beneath the main hill to collapse.  This flattened the top of the hill and turned the river into a huge lake that could not drain.

Yezadra, which controlled the territory at that time, was already familiar with huge engineering projects; it had built and rebuilt the aqueducts that supplied Kanrodir (which would become just Kanrodi later) many times, the most recent to accommodate the Rift.  So in retaking Bahlaer after the disasters, the Yezadran engineers cut a new channel for the river through the east side of the hill.  Part of this was to drain the flooded valley and turn it into farmland, and part was to gain better military control of the river by restricting it to a narrow band that could be fired upon from both the fortress-hill and the new eastern ridge.

The northern part of the river never narrowed sufficiently for the latter, but the draining of the lake did free up a large amount of land for farming.  And as the years passed and the fighting between empires died down, the rebuilt fortress — already smaller than its predecessor — became obsolete.  Much of it ended up being dismantled as an easy source of building material for the city that had grown up around it.

With Yezadran power collapsing, Bahlaer became semi-independent — and then finally seceded, to join the Altaeran Empire briefly before seceding from there as well to become its own city-state.  Its position on the river became a mercantile boon instead of a military one, which the Bahlaerans exploited ruthlessly to retain the essence of their independence even during the many times they were ‘conquered’ by aggressors.

Eventually, the city expanded to consume its nearest satellites, and the walls were pushed out to encompass them.  The buildings currently topside in Bahlaer range between two hundred and twelve hundred years old — with newer buildings here and there to replace demolished old ones — while there are levels of ruins beneath the city at ages of fourteen hundred, twenty-one hundred and four thousand years old.

Back to to the pictures….

I drew a rough line around where all the satellite towns were and declared it the current city wall.  Then, acting on advice from The Cartographer’s Guild as usual, I drew in the main roads.

These are the ones that used to directly connect the satellite towns to the main, plus a few I already knew were there (like the Y-shaped intersection on the bottom right, where Whitemane’s Inn will be).

Then, in the more populated areas of town, I started drawing in the smaller roads.  The idea here — and I hope this will work — is that more roads will equal more houses, more closely packed, and thus look more built-up, while the spaces that remain wide open will be used as enclosed pasture-land/parks/wharfs and warehouses and things like that.  Pre-industrial industries.

With that in mind, names for certain districts started leaping at me, so I added them to this last map:

If you zoom in on this map, you’ll find the Potters’ Downs (in the flood-prone basin where the old lake used to be), the Night Fields (on the south edge and hopefully downstream/downwind of everyone, possibly with its own gate and more proper fields outside the city limits), Tanner Wall, Old Crown up there in the ruins of the fortress, a few of the most frequently flooded districts, and of course the Shadowland (which is not just that one lopsided district but several of them in the vicinity, which I’ll probably color-code once I get around to placing actual buildings).

Anyway, this is the Bahlaer situation thus far.  Still a lot to do, especially if I want it to eventually look nice enough to be an insert in one of the books, but it’s a start.