Since I was working on the numbers, I figured I should do some words in Gheshvan.  But since Gheshvan is technically a pictographic language, that would mean thinking up a lot of little pictures…and I haven’t had brain enough for that recently.  So, an alphabet instead.

Not that Gheshvan wouldn’t have an alphabet, after all.  Languages (written and spoken) metamorphose over time, and Gheshvan is still in use in modern Halci, as well as being the base language for a lot of the local tongues–sort of like Latin, which birthed the Romance languages.

Offshoots of Gheshvan (that I know of so far) are:

Ridvan, spoken in Riddian, a softer version of Gheshvan mixed with Thiolanc (the wolf language).

Brinvan, the liturgical language of the Trifold Faith, a heavily corrupted version of Gheshvan.

Korvan, spoken in Corvia, hard consonants with an emphasis on ‘e’ vowel sounds. 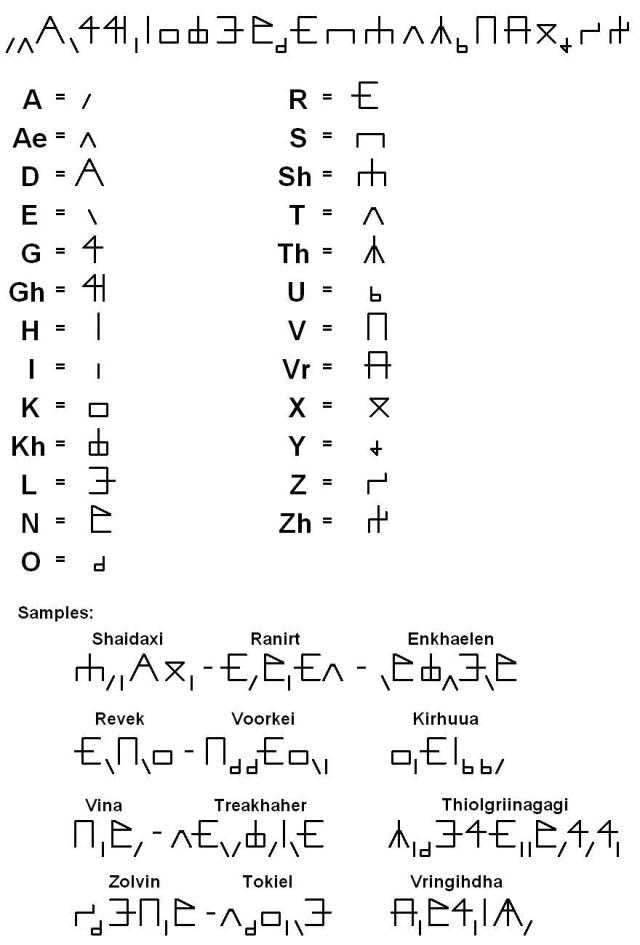 In a sentence, the names would be surrounded by brackets like [  ] to identify them as names.  The vowels are positioned more like accents than like proper letters because they’re not really considered letters — many vowels and vowel-combinations have a second life as modifying-words themselves, and modifiers (in the pictographic version of the language) hang out there on the bottom as shown.

I still don’t like the D, but that might be just because it’s difficult to do diagonals in Paint.  Or any kind of curve, really, so this is the very stiff printed version of Gheshvan, and modernly-written stuff would look more fluid and curvy.  Gheshvan was originally scribed in mud or clay with sharpened reeds, thus the need for clean lines and angles; with quill-pens and chalk and the like now in use, precision is not as necessary.

Still far from perfect, but workable, I think.